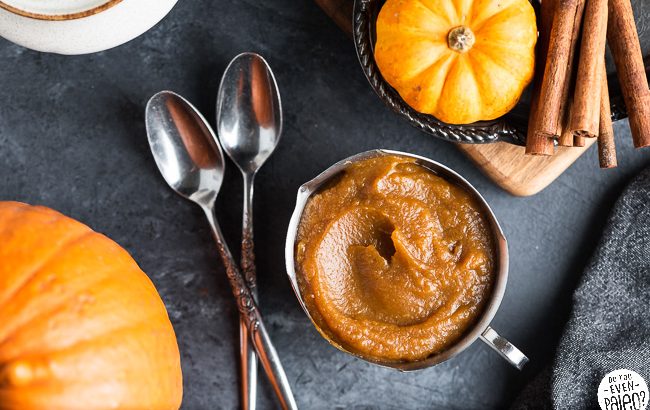 A few weeks ago, a few friends told me that they’d never had pumpkin butter. Freaking ridiculous, if you ask me!

Pumpkin butter’s quite the treat to miss out on. Caramelized, spiced pumpkin puree makes a killer spread and/or dip. Heck, I finished off my jar by eating it right from the jar… for a pumpkin lover, it’s a cold-season must have.

How to make fresh pumpkin puree

For this paleo pumpkin butter recipe, you have the option of using fresh pumpkin puree or pre-packaged pumpkin puree.

Obviously pre-packaged puree takes out a bit of the time commitment, but in case you’re like me and prefer the from-scratch route, here’s how you can make fresh pumpkin puree at home.

Start with a small pumpkin, such as a sugar pie pumpkin. The big carving pumpkins have been grown specifically for carving and have tougher, stringier insides that don’t lend to actual baking and consumption.

Cut your pumpkin in half and scrape out all the seeds (save those to roast later) and stringy “guts”. Then bake the halves, placed cut side down on a baking sheet, at 350 degrees for about an hour depending on the size of your pumpkin.

Then, let the halves cool enough to handle. Scrape out the pumpkin flesh and puree using a blender, food processor, or immersion blender. And there you have it — fresh pumpkin puree!

How to make pumpkin butter at home

Pumpkin butter is SO easy! You’re going to love how easy it is to make a huge batch of warming pumpkin butter.

Simply add all the ingredients to a large pot. Bring to a boil, then reduce heat and simmer, stirring occasionally for about 15 minutes or until the butter reaches your desired thickness.

Yeah. That’s really it! Didn’t I say it was easy?

How to customize homemade pumpkin butter

The best part about simple recipes like this one is that they’re easy to customize.

So, here are a few ways you can adjust this recipe and make it your own!

Ways to use pumpkin butter

When most people see jams, butters, and other spreads, their thoughts tend to immediately gravitate towards toast.

But that’s just the tip of the iceberg, my friend. I’m going to challenge you to think outside the box with this paleo pumpkin butter!

Here are just a few ideas on how you can use it:

Simple stovetop pumpkin butter recipe that’s paleo, gluten free, nut free, and dairy free! Spread it on toast or pancakes or use as a dip for fruit.