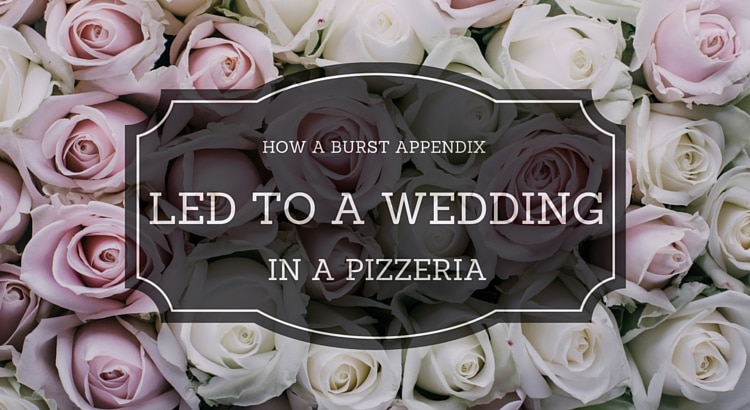 I tried to say these words facetiously. Since rushing to the hospital, this was our first moment alone together. Him in a hospital gown, strung up with medical equipment, awaiting an unplanned surgery for a ruptured appendix. Me sitting at his side, leaving work and dropping all other plans to be with him.

I couldn’t have said anything worse. His face clouded and he shuttered his thoughts.

I’d been talking about marriage.

For the first couple years of our relationship, we didn’t discuss it. Marriage wasn’t a forbidden topic, but we both danced around it because we enjoyed the grayness. Even when an NPR story started the conversation, we kept it vague. We talked about a simple, non-debt-inducing wedding. We talked about autumn, once the leaves turned, in 2016. But the conversations were kept between us—we had no ring, no date, no real zeal to start planning.

Weeks after these micro discussions began, he ended up in the hospital and our tentative plans were shattered. His ruptured appendix meant unavoidable surgery, and he was uninsured. No way could we afford even the small wedding we had started dreaming up, not with almost $30,000 in hospital bills.

Other than my one comment, we pushed those thoughts out of our conversations. He had to focus on healing, after all.

But when he was finally released from the hospital four days later, we breached the subject of marriage again. I learned that my words in the hospital had devastated him.

“I don’t want to wait that long.” Since I’d met him, I’d hardly heard him that convicted.

This got me thinking. When we had started our cautious discussion of marriage, it was a general discussion about how out-of-hand weddings had gotten. I’d talked about the insane cost of the average wedding. He’d quipped that weddings were hardly about the couple getting married and more about a day of showmanship for family and friends. His views were certainly cynical, but in the end we both had agreed that our big day wouldn’t be an expensive, stressful “best day of our lives”. Instead, our wedding day would simply be the beginning of a life together—a celebration, but a modest one.

I had it—the answer to our problems. (The marriage problem, at least. We’re still figuring out the hospital bill problem.)

Why wait at all? The only hurdle to getting married was the big, traditional wedding that our society expects. A venue, a ceremony, a dress, invitations, reception, DJ, photographer. That’s not what a marriage is about. We loved each other. I knew I wanted to spend the rest of my life with him. Do invitations, decorations, wedding party, and reception really matter?

“We should get married. We both want to, so why wait?” I don’t remember if that’s exactly how I pitched it to him, but it was nonchalant. He thought I was joking. I persisted, and the decision was made. We went through all the “traditional” parts of a wedding to see if there was anything we cared to wait for. Throwing out tradition and the “Pinterest-worthy” parts of a wedding gave us freedom. We could get married whenever we wanted. Wherever we wanted. Assuming, of course, it was cheap or free.

With that, we quickly realized what mattered in a wedding: that two people want to commit their lives to each other—Love. Dropping everything to stay at someone’s side when they’re sick and later dedicating time and attention nursing them back to health. Recognizing that life has been happier since we met, and even the so-called hardships seem easier when you face them together. Knowing that you want to plunge into the unknowns of the future as constant companions.

We still wanted to celebrate the occasion, and our priority was simply being with close family and friends—about 40 people. We knew that with short notice, not everyone would make it—that’s inevitable.

We shocked our family and friends by announcing our wedding date: New Year’s Day, a couple months away. We initially wanted to get married sooner than that, but since the first of the year is on a Friday this year, we couldn’t pass up the symbolism. A new year, a new life together. And every New Year we will look back on another year together while turning eager eyes to many more years.

Oh, and the venue? Our favorite pizza place.

And that’s the extent of our plans. We’re shifting the focus away from staged ceremony, surroundings, picture-perfect dress and decorations. Our non-traditional wedding will plainly be about us, our love, and our eagerness to be legally bound together for the duration of our lives. Well, all of that mushy stuff and spectacular pizza. Really, we can’t think of anything better.