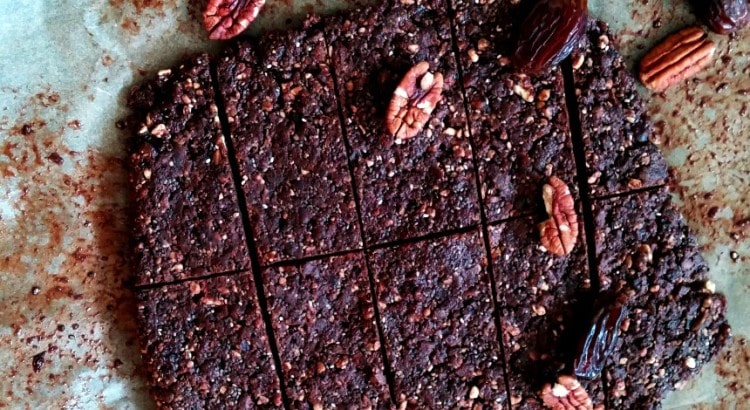 Sometimes I really just want chocolate. I mean, who doesn’t? People that don’t like chocolate, I guess. But those people are kind of weird and you should be a little suspicious of them.

The problem with chocolate, though, is that on its own it’s not super great for you or very filling. I’m not really one of those “oh, I’ll only have one bite of this dark chocolate bar and I’m good” kind of people. I’m not really a “I can’t help myself and I’m going to stuff my face with chocolate” person, either. Perhaps I just like experimenting too much, so I just throw cacao powder at things hoping it tastes good. Well, whatever the reason, I came up with these Spiced Chocolate Chia Energy Bars, and they were chocolatey and delicious enough to share with all of you!

This idea burrowed its way into my brain yesterday. I was at OLY class at CrossFit (olympic weightlifting-focused class) and my coach asked me if I was going to do the Open. No, not the upcoming CrossFit Open (although I’m considering that, too). This April, North Dakota is having it’s very first USA Weightlifting Open at my CrossFit box! Honestly, I hadn’t really thought about competing. Because it wouldn’t be a competition for me. I wouldn’t win. Now, I’m not being self-deprecating, it’s just a fact. Heck, I still don’t have my 100# snatch! For many weightlifting women, that’s an easy weight.

However, my coach explained that there actually is a chance of me placing. This is likely to be a very small event, since it’s North Dakota’s first. And places for weightlifting meets aren’t just split between men and women, it’s also split by weight class. So, hypothetically, if only three women show up in one weight class, they’d all place. Since this is ND’s first open, they’d then all be state title holders. That thought is kind of cool, honestly. Still don’t know if it’s enough to get me to sign up.

My coach then went on to tell me that I might find it helpful to have a clear goal for my weightlifting. Even though I wouldn’t be in it to win it, I’d still want to perform my very best lifts at the competition. It would encourage me to completely focus in on the OLY lifts for the next few months, with heavy work in technique and probably more than a couple PRs. That does a way better job of sparking my interest than the possibility of holding a state title on a fluke.

I’m considering signing up. I’ll be asking when the deadline to register is and stew it over until then.

Okay, back to the chocolate chia energy bars. Man, I’m just all over the place today.

I’ve always liked the idea of making my own Larabar-type bars, but had never actually tried it until now. The big draw of making my own, though, is simply that I can add more nutrient-dense ingredients, so it functions as more than just a treat. That’s why I don’t add honey or anything like that — I just don’t want that added sugar in my body. Dates at least have fiber. I had to add chia seeds because they’re awesome (tons of protein for a seed, lots of calcium, magnesium, and all sorts of good stuff), and used coconut oil for brain fuel (those MCTs, yo!). The healthy fats and protein will supply some quick energy, which is exactly the intended effect! As already discussed, they had to have chocolate. And then, because of the season, I spiced it up with some of my favorite fall/winter spices. You could omit these if you want, though.

Because of the coconut oil, these are best kept and served cold. At room temp, they’ll start to get crumbly…almost like a weird raw chocolate-laden granola. But cold, they stay together, and they’re brimming with full, dark chocolate flavor and a touch of fall.

Tried them? I’d love to hear what you think! Leave a comment below!