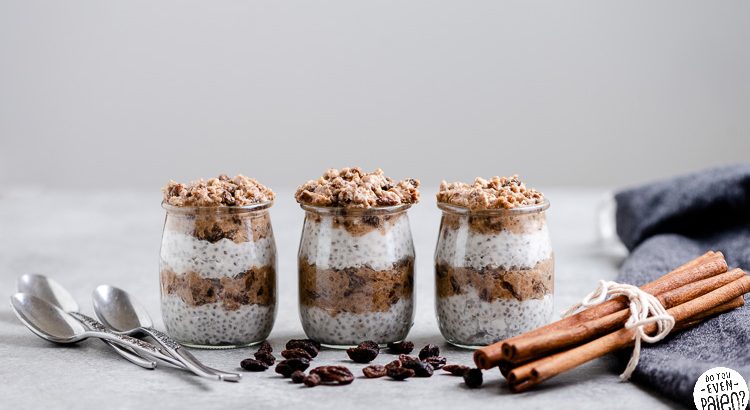 With just a handful of ingredients, this paleo, keto, and vegan chia pudding recipe features the classic combo of cinnamon and raisin.

Chia pudding is an easy-to-prep meal or snack with countless variations. If you’ve never made chia pudding, this is a great recipe to try it out — it tastes like cinnamon raisin toast!

One reason chia seeds and chia pudding rose in popularity is the nutritional benefits of chia seeds. They were one of the first “superfoods” — even though that’s essentially a meaningless label cooked up by marketers. That said, they DO hold a lot of nutritional value!

How to make chia pudding

Chia seed pudding couldn’t be easier. Whisk a few ingredients together, let it sit in the fridge for a couple hours to thicken, and you’ve got chia pudding!

Generally, the ratio I use is 1/4 cup chia seeds to 1 cup non-dairy milk.

My favorite non-dairy milk to use is full-fat canned coconut milk, which is what I used for this recipe. But you can sub in your favorite!

To make a basic chia pudding, whisk together 1/4 cup chia seeds, 1 cup non-dairy milk, 1 teaspoon vanilla extract, and (optionally) 1 tablespoon maple syrup. Once it’s all combined, cover the bowl and put it in the fridge. I leave mine overnight because I like it super-thick. Stir again before servings, and there you go!

From there, you can make so many different chia pudding recipes, like this cinnamon raisin chia pudding!

Because chia pudding is so simple, you can adjust it a myriad of ways.

More breakfast recipes for a healthy start to the day

With just a handful of ingredients, this paleo, keto, and vegan chia pudding recipe features the classic combo of cinnamon and raisin.

To make a layered version like I did in the pictures: whisk coconut milk, chia seeds, and maple syrup together until combined. Transfer half of the mixture to a separate bowl. Add cinnamon and raisins to one bowl, stirring to combine. Cover and refrigerate both bowls overnight. When serving, layer a couple scoops of plain chia pudding with a couple scoops of cinnamon raisin chia pudding.