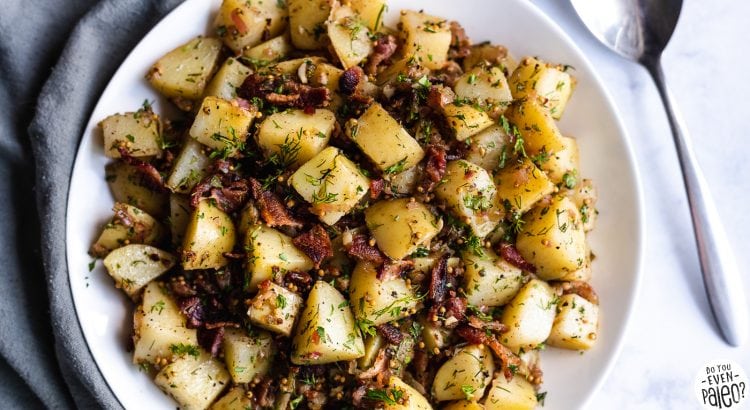 If you thought you knew potato salad, this German Potato Salad Recipe is going to blow your mind.

With tender Yukon Gold potatoes, bacon, fresh herbs, and a vinaigrette to bring it all together. Serve this Whole30 and paleo potato salad hot or cold—it’s fantastic either way. 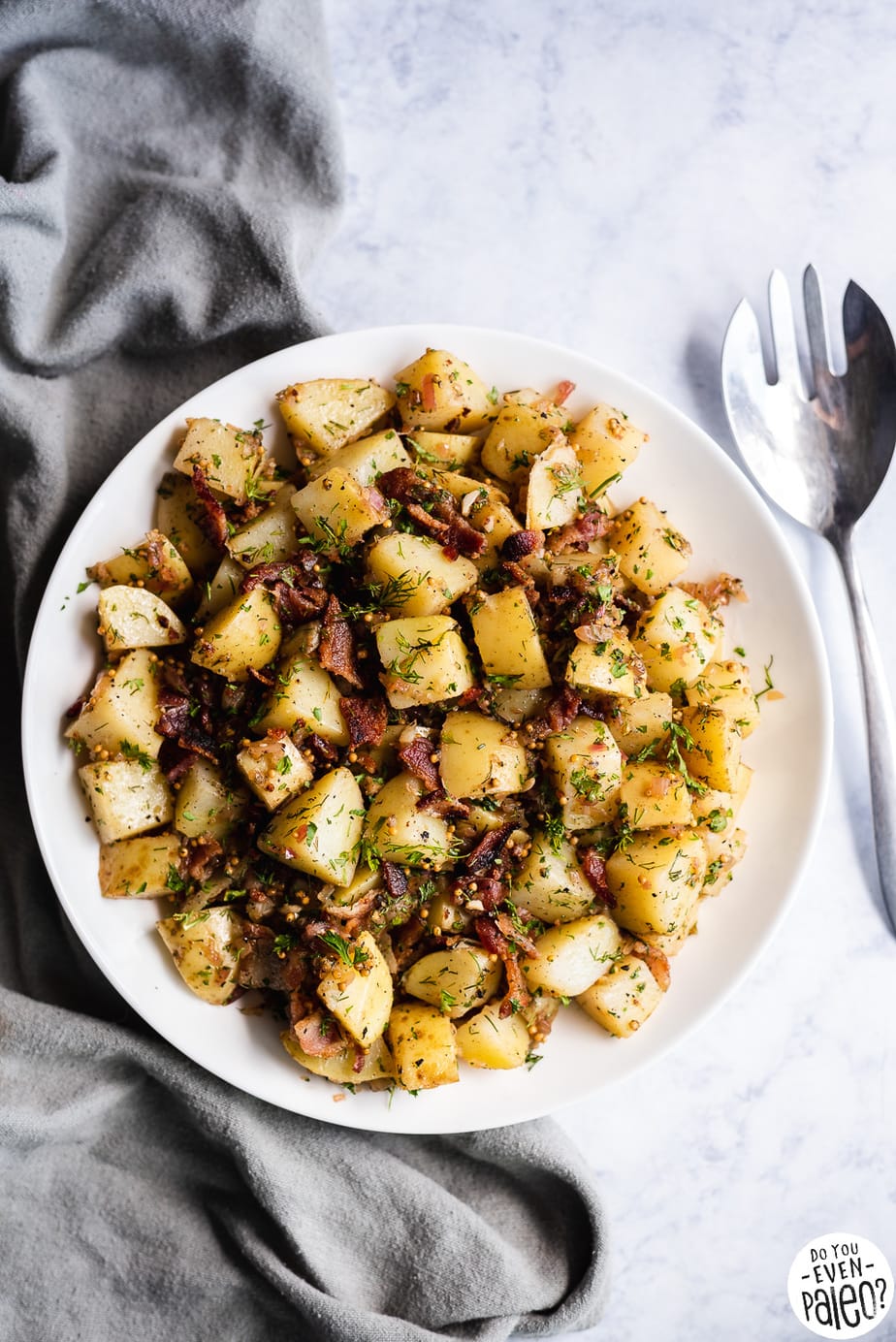 How to boil potatoes the right way

Yes, there’s a chance you’re going to roll your eyes, but I’m going to tell you how to boil potatoes for awesome potato salad.

First, chop up those potatoes into uniform-sized cubes. Put ’em in a pot. Add water until the potatoes are submerged by at least an inch. Put the pot on the stove and bring to a boil.

Make sure you boil the potatoes in that order. Growing up, I had always learned to boil the water and then add the potatoes — turns out that’s WRONG. If you do that, the outside of the potatoes will cook before the inside and start to fall apart. On the other hand, if you bring the water to a boil with the potatoes already in it, the potato cubes will heat evenly. 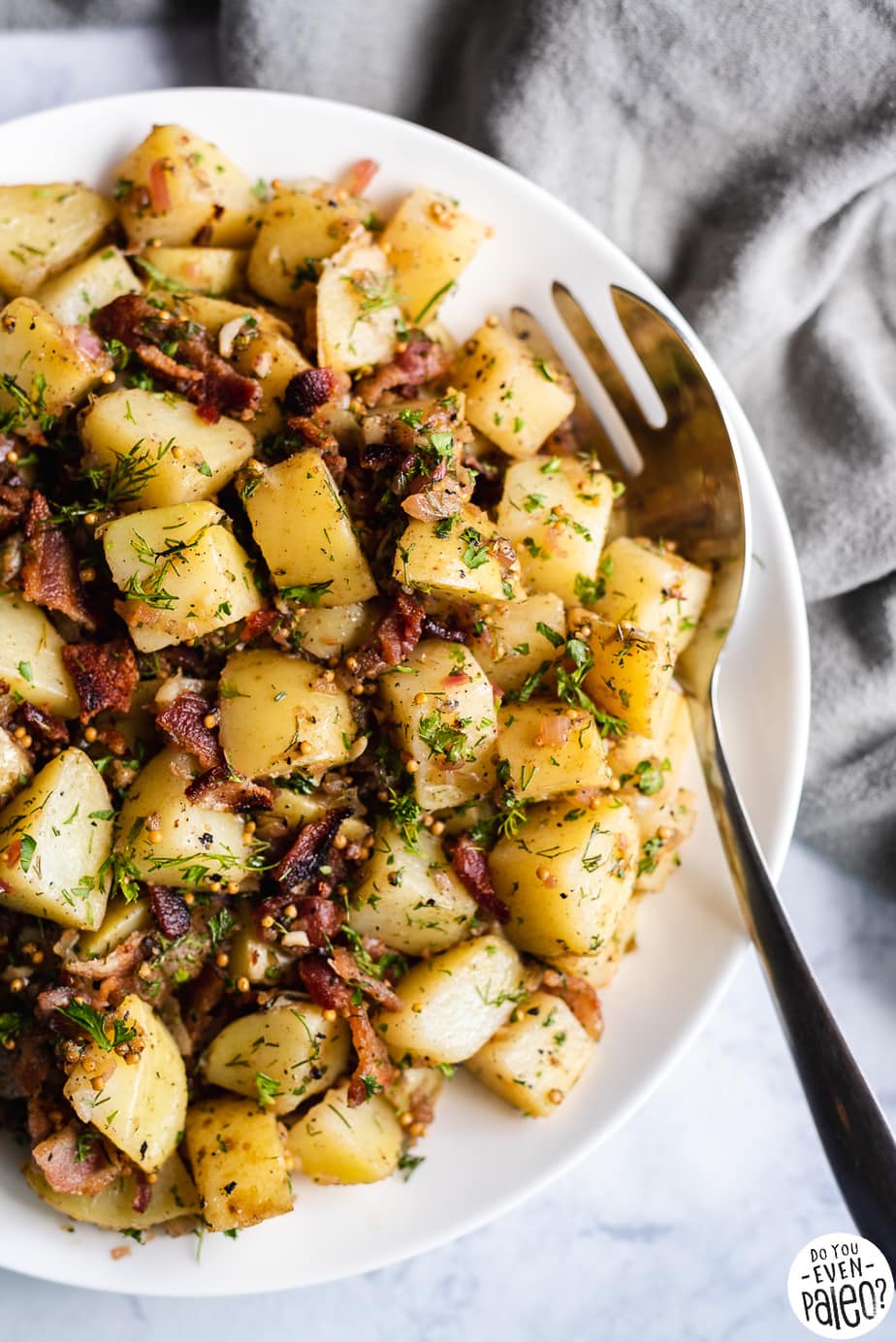 After the potatoes have boiled for 5-8 minutes, test them by stabbing a potato piece with a fork. If it slides off the tines, you’re good to go. Turn off the heat and immediately strain through a colander. Give the potatoes a good shake. And here’s the pro tip: add the potato cubes back to the pot on the burner (it should still be hot because you JUST turned it off) and quickly stir to evaporate the excess water. It only takes a few seconds, but this step truly makes a difference!

Plus, the quick stir breaks down the outsides of the potato cubes a little, which adds a tiny bit of creaminess to the end potato salad without adding any mayo. Win! 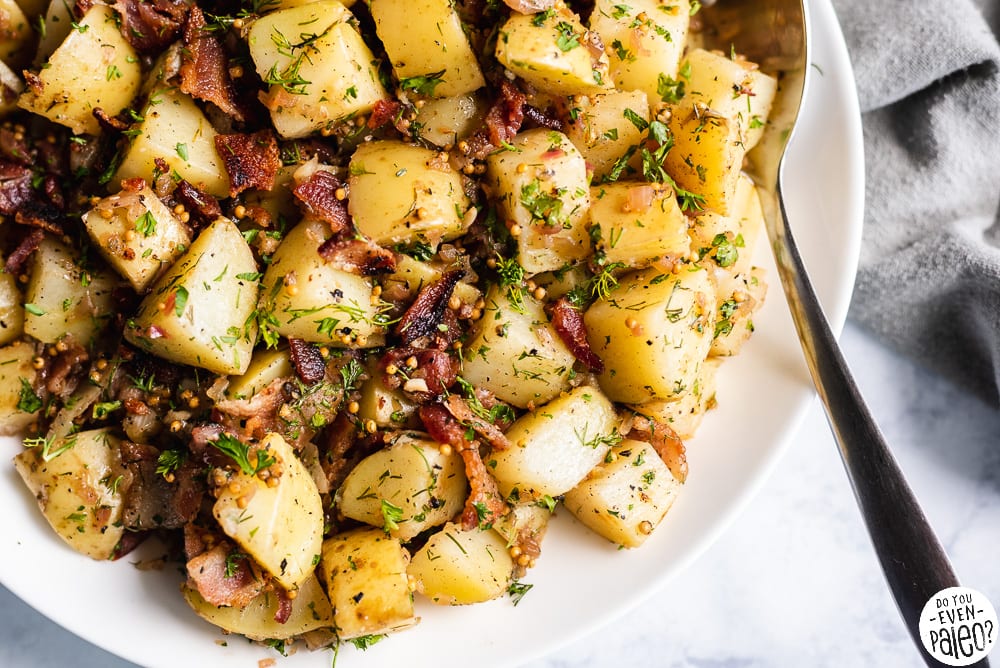 Essentially, German potato salad uses a vinegar-based instead of mayo-based sauce. Because of that, it can be served either hot or cold. 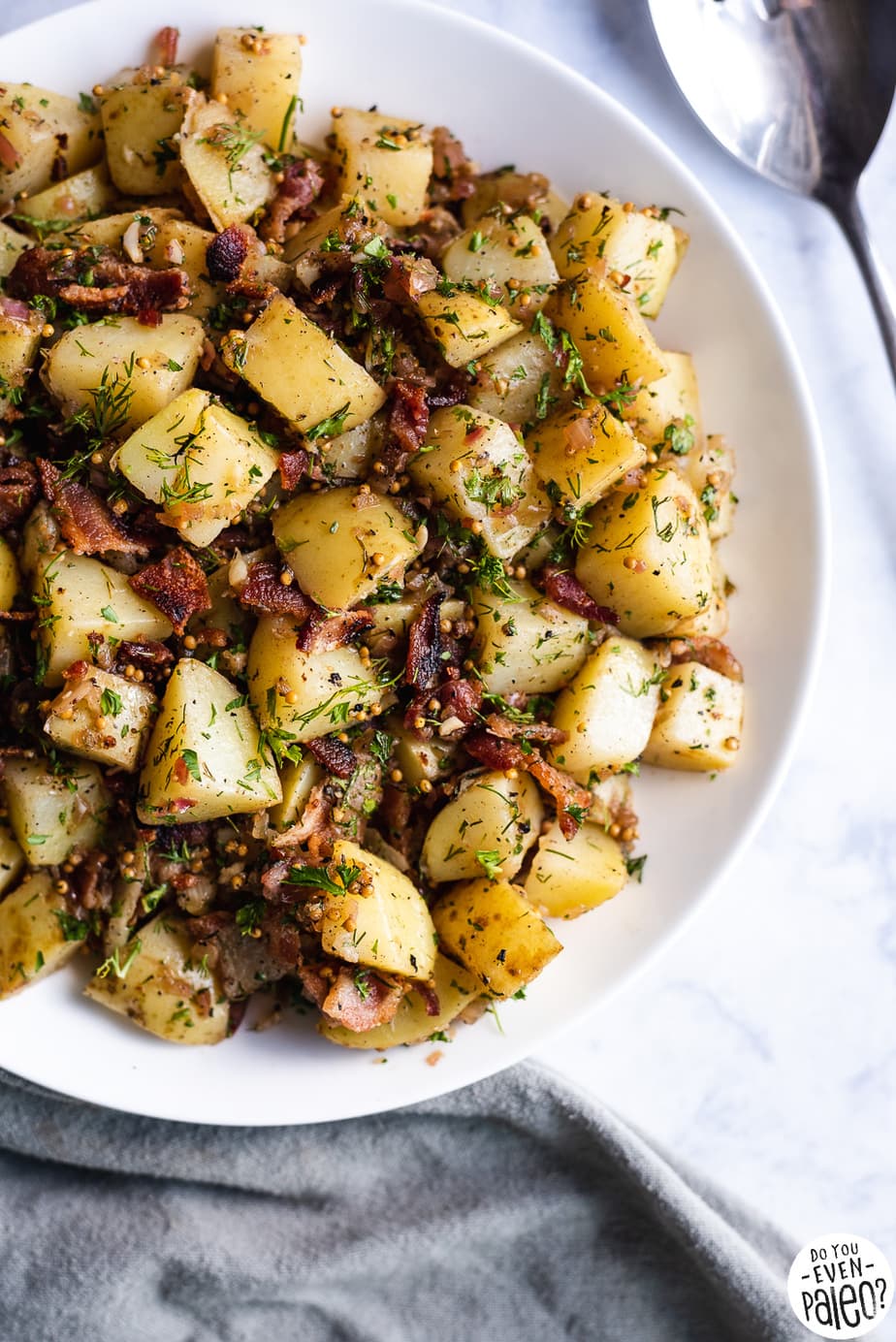 With vinegar and bacon, German potato salad has the tart bite of vinegar with the umami flavor of bacon. Mustard, parsley, and dill create a little more complexity and beautify the dish. 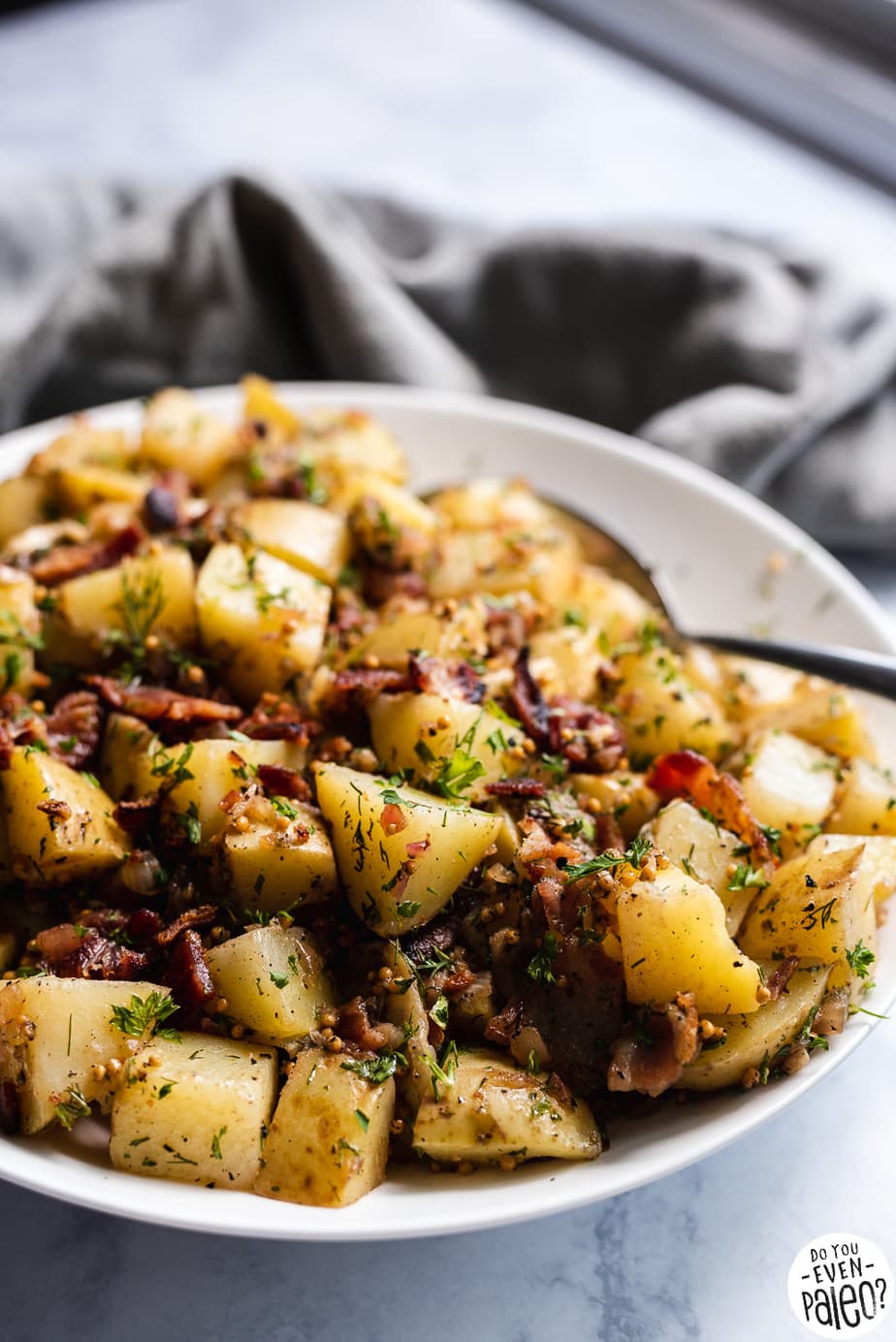 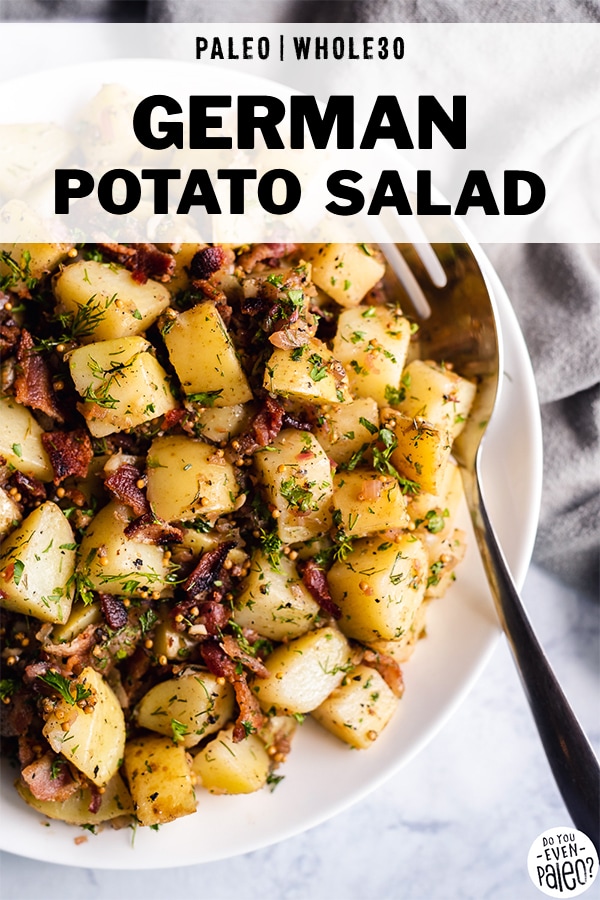