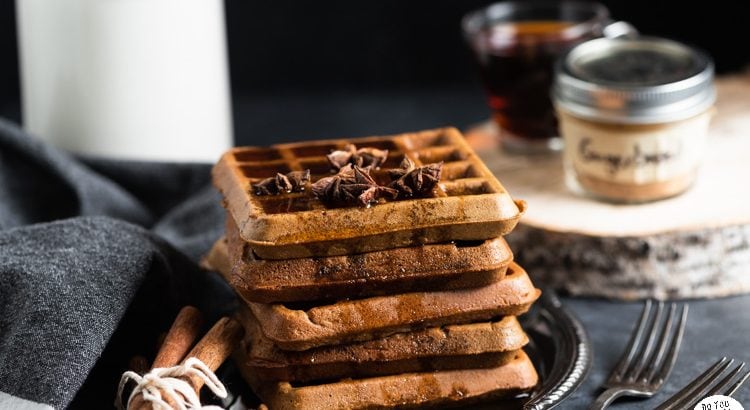 Breakfast dreams are made with Gluten Free Gingerbread Waffles.

Molasses and a homemade spice blend give the waffles their warm gingerbread flavor. Use my tip for light, fluffy, crispy waffles to make these even more of a treat!

These waffles are gluten free, dairy free, paleo, and vegetarian. This breakfast pairs well with apple butter, pumpkin butter, or a simple drizzle of maple syrup!

The secret to fluffy, crispy-on-the-outside waffles

This tip adds a little more time to the cooking process, but in my book it’s 100% worth it.

The secret: separate the eggs and whip the egg whites before folding them into the waffle batter.

When you whip the egg whites until soft peaks form, you’re essentially adding a ton of air bubbles into the egg whites. (This is the same thing you’d do for meringue.) All those air bubbles mean more volume — fluffy, airy waffles!

That’s it. The best part? It works for essentially any waffle recipe! If the recipe uses eggs, just separate them and beat the egg whites using a hand or stand mixer until soft peaks form—it takes about 5 minutes with a stand mixer on medium-high speed. Fold the egg whites into the batter right before cooking. And that’s it!

The only time I wouldn’t use this tip is if I’m super strapped for time and can’t spare the 5 minutes OR I’m making these as part of meal prep. Reheated, the waffles will lose a bit of that crispy outside anyway. No need to whip the egg whites then!

I’ve got to be honest—gingerbread trumps pumpkin spice in my world. The spices involved are similar, but in different ratios.

I like making a larger batch of gingerbread spice mix that I can keep in my spice cabinet all winter long. That way, gingerbread lattes, gingerbread hot chocolate, gingerbread cookies, and gingerbread waffles are all at my fingertips without having to remix the spice every time!

So to make a batch of gingerbread spice mix, just combine the following into a small jar and shake it up:

Equipment for this recipe

The important items for this recipe: a waffle maker, mixing bowls, and a spatula.

I’d love to have a Belgian waffle maker someday, but for now I have a cheap waffle maker (it doesn’t even have a timer!) my brother got me for Christmas one year. As long as it gets the job done, you’re good to go!

Shop my top kitchen essentials through my Amazon favorites page!

With molasses and a homemade spice mix, these light and fluffy gluten free gingerbread waffles are a perfect breakfast treat! If you’re in a rush, don’t separate the egg whites and yolks. But if you want breakfast magic, don’t skip that step!

For the gingerbread waffles

For the gingerbread spice mix