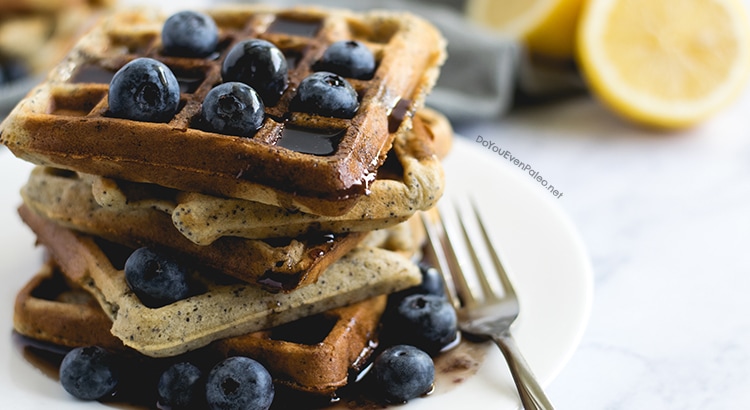 I adore breakfast foods, but typically my mouth starts watering for more savory fare like omelettes, hashes, and skillets. Still, every once in a while I get a hankering for pancakes or waffles. This time, it came along with the idea for a lemon + blueberry waffle pairing. The rest is history.

As mentioned, I don’t make stuff like this that often. Frankly, waffles, pancakes, and pastries just aren’t that nourishing regardless of whether they’re gluten free or paleo. Not to mention that I simply have an easier time developing recipes that don’t involve alternative flours and things like that. I used to enjoy baking, but now that my interests lie in healthier fare (and, let’s face it, plantains) I tend to leave the paleo baking to the paleo bakers. (read: not me)

But every once in a while I decide to play around with gluten free flours. Hey, maybe someday I’ll really get the hang of it! I’m proud enough of these gluten free lemon poppy seed waffles to share them here, which is saying something.

Oh, and the blueberry maple syrup. Let’s not forget that.

I was first tipped off to the phantastical world of flavored maple syrups by a Food52 article on the subject. Eyes opened.

It looked so easy. And boy, it was worth it to give it a try! I know, it might seem super advanced and fancy, but it’s so freaking easy to infuse your own maple syrup. Plus, if you end up serving waffles and blueberry maple syrup to your guests, they’re going to think you’re a kitchen master. And you can sit there, basking in the praise and compliments, knowing that all it took was two ingredients and a saucepan.

I picked up another awesome tip from the internet—separating the eggs and beating the egg whites before adding to the batter. (thanks, The Kitchn!) You can skip this step if you don’t want to bother. But trust me, it does make for fluffier waffles. Hurrah!

For the Lemon Poppy Seed Waffles

For the Blueberry Maple Syrup

If you taste the blueberry maple syrup and there’s just not enough blueberry flavor for you, all you have to do is add more blueberries and repeat the heating process. Easy!