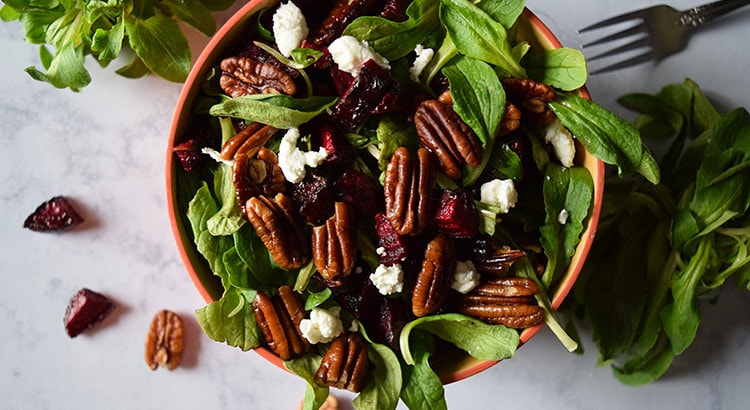 Much like my adventures with kohlrabi, mâche showed up in the early weeks of my CSA share.

It was right about the time I felt like I was going to be drowning in salads for the duration of the CSA…there was absolutely no light at the end of the tunnel – I was destined to eat just salad for weeks and the burden of that might just do me in. You see, there was just so much lettuce at first! As a meat and potatoes kind of girl, I didn’t think I would survive so many boring-ass salads.

Mâche saved my salad-heavy meal rut. Luckily, I also realized that salads could be a lot more creative than just lettuce and dressing. But seriously, mâche is awesome.

Let’s learn a little more about mâche, shall we?

Mâche is also known as cornsalad or rapunzel. Woah, wait. Does Rapunzel sound familiar to you? It probably should…if not, go and read Grimm’s Fairy Tales, fool. Yes, mâche is the wonderful little plant that Rapunzel’s pregnant mother craved so fiercely her husband was willing to give up their unborn daughter to get it.

It’s also called cornsalad, apparently, because historically it grew like a weed in corn fields. It’s also called lamb’s lettuce. There are other names for it, too. If it’s not obvious, mâche really needs to keep its story straight. Maybe that’s why it’s not super popular (actually, it has more to do with the fact that it’s too small to be harvested mechanically).

Mâche has small, delicate leaves with a slightly sweet & nutty flavor to match. It’s not crunchy like typical lettuce leaves, which I found relieving in my salad-heavy days. Instead, its texture is closer to baby spinach (as opposed to crispy butter lettuce/kale/etc.). 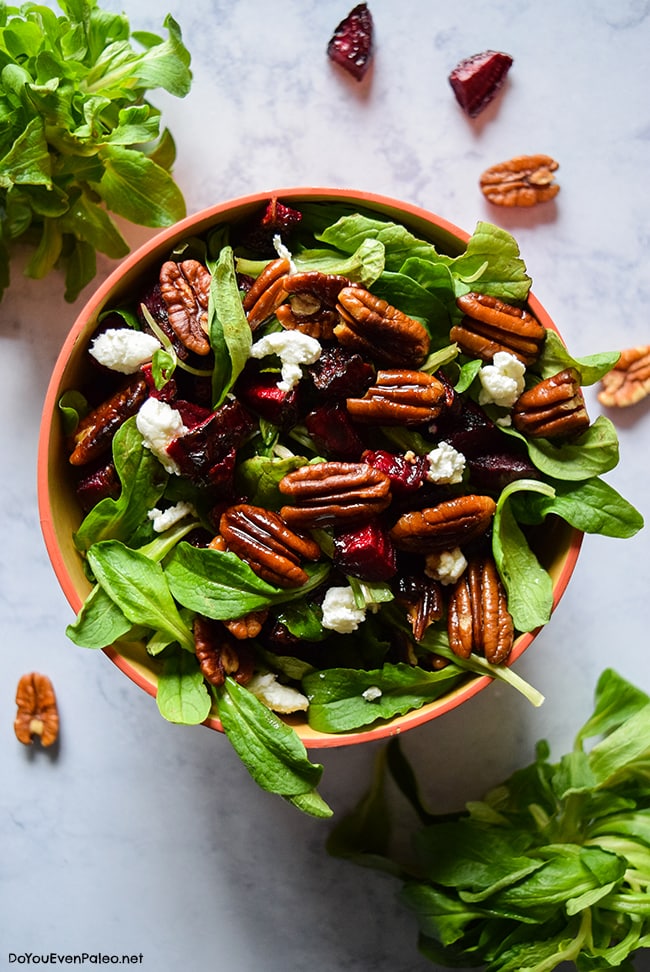 Okay, okay. What about the nutrition profile? After all, that’s why kale and spinach are so popular – they’re practically superfoods with all the vitamins and minerals they’re packed with.

Mâche is crazy high in vitamins C & A. In fact, 1 cup of raw mache has almost 80% of your daily Vitamin A. It also has pretty decent amounts of beta-carotene, iron, potassium, and Vitamin B-6. Mâche is one of the highest leafy green sources of Omega-3.

So really, I have no clue why there aren’t more people eating mâche salads.

I know, however, that unless you are a homesteader or have a farmer friend, you probably won’t be able to find mâche anywhere. One advantage of this little plant is that it doesn’t take up much space, so I guess you could buy seeds and try to grow your own – I’m going to give it a shot next year.

For the sake of this recipe, feel free to use spinach. But if you are able to track down some mâche, do it. After all, mâche is the special part of this salad. The beets, pecans, and goat cheese are pretty typical salad toppings – they simply go together.

Oh, and if you like mâche and have tips on growing it or where to find it, mention it in the comments to help fellow readers out. Let’s spread the warm, fuzzy mâche love!