It’s time for something completely different around here. Since it’s National Cat Day, I thought I would introduce the my little crew of cats. This post is going to get lengthy, so grab a cup of coffee and strap in. 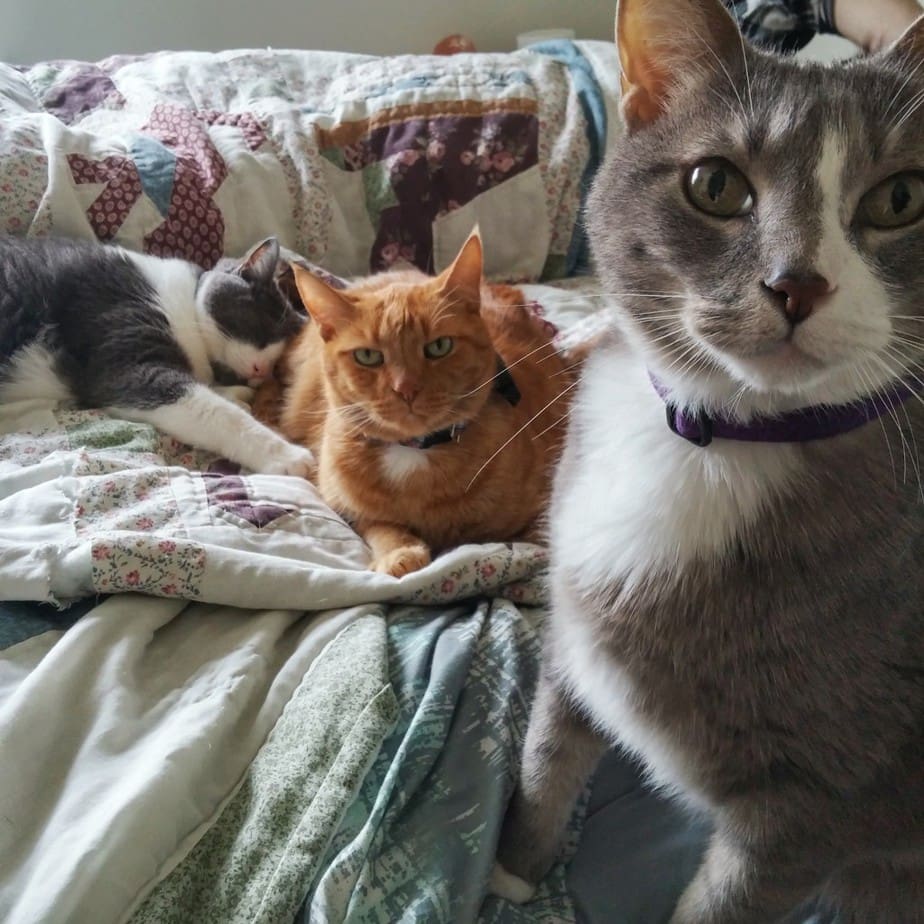 These are the furballs that rule the apartment. They’ve captured my heart, my partner Tjay’s heart, and the hearts of our friends. Since the cats have enthralled us with their robust personalities and utter cuteness, I’ve taken to calling the three of them The Kitty Committee. Like I said, they basically run the place.

I like to imagine that they get together and make decisions on life in the apartment.

“Mom, we have decided that we should be fed when you eat, so that we can eat together as a family.”

“Mom, that chicken smells amazing. The Committee has decreed that we should all get a bite. Or twelve.”

“Mom, the temperature has reached a balmy 40 degrees outside. That’s warm enough to open the windows and balcony door so that we can be awash in fresh air.”

Well, that’s what I like to imagine. It’s probably closer to….The Kitty Committee tried to get through a full meeting today, but the whole thing fell apart when Waffles saw Mom head to the bathroom. He ran off to drink water from the sink. Meanwhile, Marley seized the opportunity to cuddle with Loki, but Loki was having none of it and stormed off to the balcony. Meeting adjourned.

Anyway, since I already sound like a crazy cat lady…here’s more about each member of The Kitty Committee. 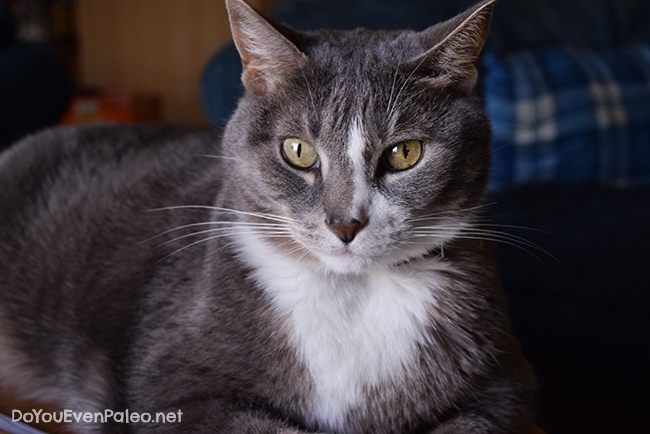 Loki’s the original member. I adopted him from the cat shelter in my hometown when I was 14…my parents didn’t want another pet, but I had 3 surgeries that summer and my mom had pity on me. He was a tiny, rambunctious kitten when I adopted him. Now, he’s more accurately described as a behemoth.

I’m not kidding. He’s a huge cat. My dad once joked about buying a saddle for him so that neighborhood toddlers could ride him.

When I lived with my parents, Loki was given free reign of the neighborhood. He explored whether I liked it or not. He once tried to follow me as I walked to work at the local grocery store about 6 blocks away. And he used to do quite a bit of hunting! As a kitten, he definitely lived up to his namesake (seriously, if you don’t know, just do a Google search for “Loki, God of mischief”). As he grew, he formed a solid bond with me, but he remained quite aloof. That changed when I moved away to college and he couldn’t come with. Suddenly, whenever I visited he aggressively cuddled. If “aggressively cuddled” sounds confusing…it’s the way your best friend greets you after you haven’t seen each other for a while—lots of hugs, whether you like it or not. 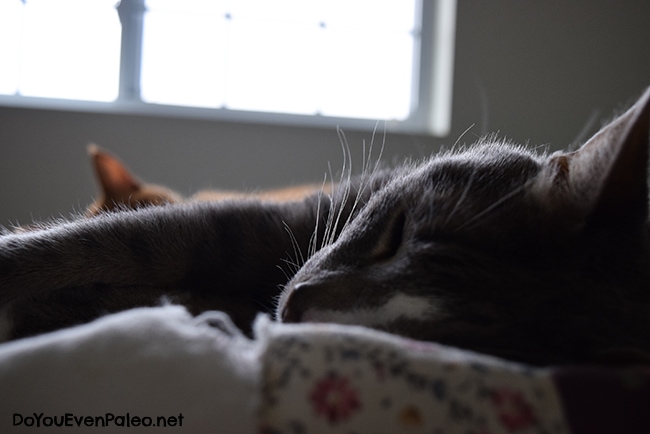 Now that he’s back to living with me, he aggressively cuddles almost anyone. He’s given up his life of adventuring for a good lap and lengthy petting session. I guess that’s just what comes with age for him (he’s 11 now). Tjay has become his favorite human…possibly because Waffles demands most of my attention now. Loki’s always eager to crawl into bed with Tjay, cuddling close so Tjay can put an arm around him like they’re spooning. He’s enthralled with Tjay’s bushy lumberjack beard. Still, Loki’s favorite moments are when he can cuddle with both Tjay and I at once…which usually happens Sunday mornings in bed. 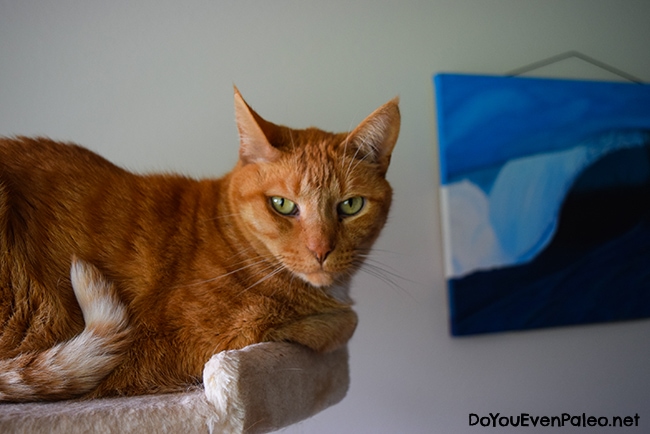 a.k.a. Marley the Pirate Cat

Oh, Marley. I never would have thought I’d have a ginger cat…nothing against them, but he wouldn’t have been my first choice. Here’s the short version of how Marley came into my life: I moved in with an ex who was jealous of my bond with Loki, so he wanted his own cat. He adopted Marley, the only cat that hissed at him when we visited the shelter. I know, I don’t get that logic either. Marley couldn’t stand my ex, so obviously my ex didn’t want him when we broke up. Which is a good thing, because Marley very quickly formed an ironclad bond with Loki once they met… 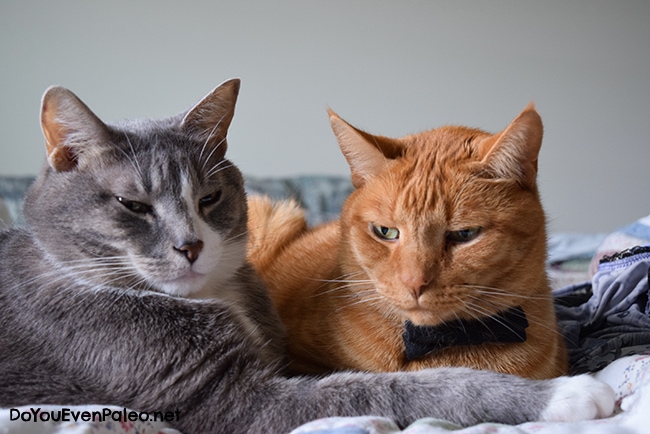 Marley could never be a lone cat in a household. He needs companionship (the shelter actually wouldn’t have let us adopt him if we didn’t have another cat). Marley was about 2 1/2 when he was adopted, and over the past 4 years he’s absolutely flourished. Originally, he didn’t give a damn about humans. He wasn’t mean, but he had no interest. He’d cautiously give a wide berth to any human in his way. He just didn’t trust humans and didn’t care about them.

Now, while he’s not an aggressive cuddler like Loki, but he does like to be pet and he’s always eager to play. He’s my most handsome cat with the largest personality variance. In one moment, he’s very princely and stoic, overlooking the room from high up on the cat tree. In the next moment, he’s flopping around adorably on the ground, perhaps silently meowing or softly chirping, trying to get our attention for some petting. Oh—and he has this wonderfully quirky habit of chasing his tail. He gets embarrassed if he notices you watching and laughing, though. He has multiple charming sleep modes: curled up like a dragon, lazily stretched to his full length, and on his side with paws and tail hooked and drawn in close. 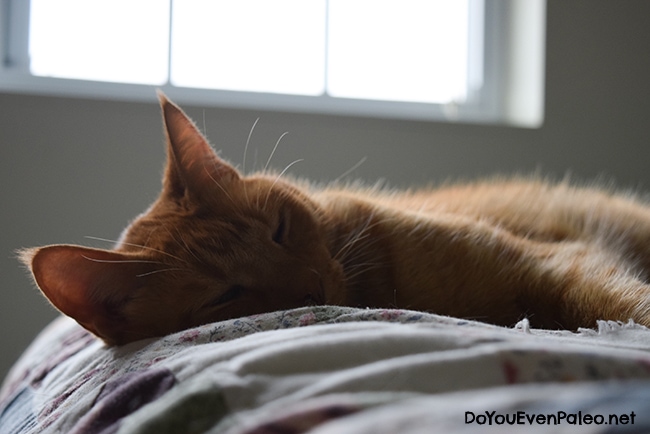 Marley can most often be found close to Loki. At least, until Loki’s had enough of his clingy behavior.

Yes, I have a cat named Waffles. 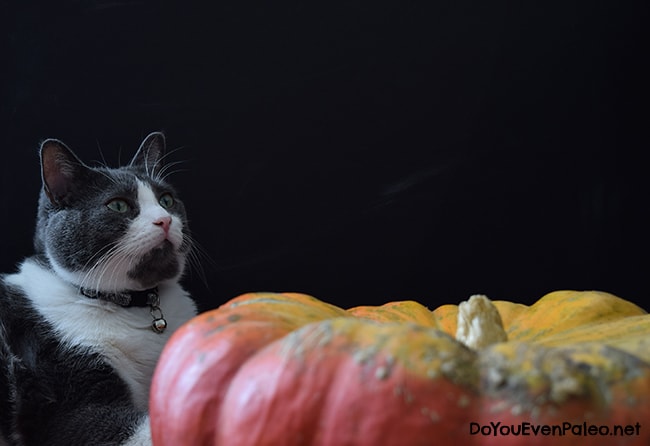 Shortly after adopting Marley, a kitten showed up at the window. He must have seen Marley in the window one night, and I woke up in the middle of the night to his mewling. I brought the kitten inside—small, dirty, underweight—and cleaned him up, fully intending to take him to the local shelter. First, I called the local shelters and the pound to see if anyone was looking for him. I put ads up on Craigslist and Facebook groups to try and find his owner. He was neutered when he came to me, so he had to have come from somewhere….but a few days later, when it would have been time to drop him off at the shelter, I realized I had given him a wonderful name and delightful clumsiness had burrowed its way into my heart.

Everyone agrees that there’s just something about him that’s effortlessly adorable, but no one can quite seem to pinpoint what makes him so cute.

He basically imprinted onto me. I named him “Waffles” after a feline character in a show I watched as a kid. I’d always wanted to name a pet Waffles, and the name just stuck. 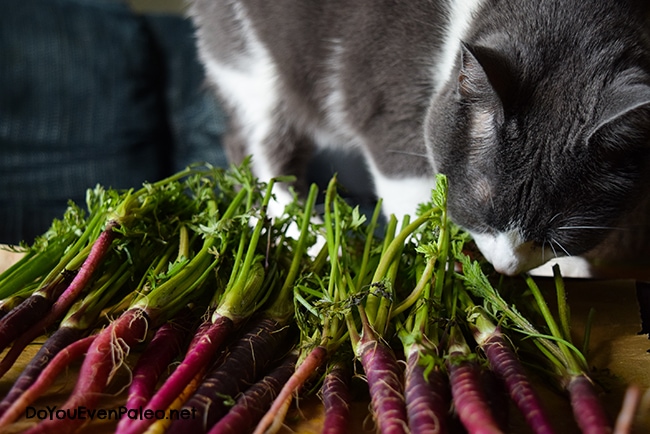 Waffles is definitely an adult cat now, but he’ll always be my baby kitty.

He still acts like a kitten. He walks around with his tail straight up in the air like a kitten (although as a kitten matures it’s supposed to learn how to use its tail to balance). He has a tiny, high-pitched, squeaky meow that he mostly uses to get my attention. His fur is still fluffy and downy like a kitten’s. But…even as the smallest cat of The Kitty Committee, he’s pretty damn big.

He’s curious. Always curious. He likes to follow me around to whichever room I happen to be in. His happiest moment is when I open up the bedroom door each morning and he can run in and jump on the bed to (hopefully) be pet for a few minutes. He has odd quirks, like drinking water off of wet hands. He is terrified of strangers, particularly men wearing boots or hats. Sometimes, he forgets who Tjay and I are and his eyes get wide and he runs away in fright. When he hears my voice, though, he knows everything’s okay. He’ll only be a lap cat if the lap is covered with a blanket, and he will gladly stand next to you on the couch and stare intently while waiting for you to put a blanket on rather than suffer to lie on an unblanketed lap.

Waffles doesn’t care much for the other cats (although recently, I’ve caught him cuddling and playing with Marley). I guess he doesn’t have time for friends when he’s so busy stalking his momma and sleeping when I’m not around. 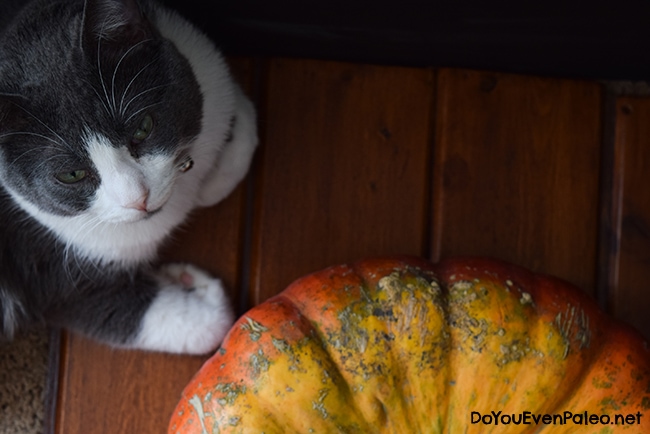 Oh, and if it wasn’t already obvious, he seems to get a kick out of jumping into my photoshoots.

8 thoughts to “Meet The Kitty Committee”