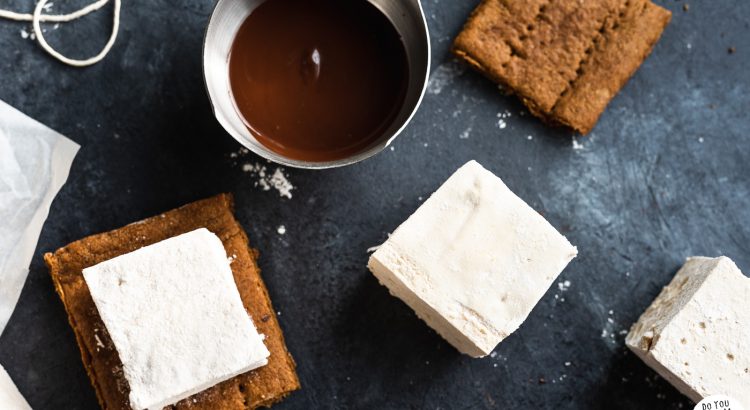 Want to have a SINGLE kitchen skill under your belt that is guaranteed to inspire delight and awe in your friends?

Learn how to make homemade marshmallows.

Then, you can take it a step further and assemble these paleo s’mores bars. That’s how you REALLY blow someone’s socks off.

Are homemade marshmallows hard to make?

Okay, pause with me a moment.

If you’ve never made homemade candy before, you likely have the preconceived notion that this is going to be really complicated.

Look at the recipe, and you might think “aw hell no.”

But I want to assure you that it’s really not that hard. Can you read a thermometer? Can you turn on a stand or hand mixer and spare a few minutes to keep an eye on the bowl?

If you answered “yes” to those questions, you can definitely make homemade marshmallows.

Here’s how to do it.

How to make homemade marshmallows

Marshmallows are all about gelatin and syrup. The first step is to let the gelatin “bloom” — that just means sprinkling it into water and letting that gelatin do it’s thang and expand.

Meanwhile, you begin heating up the sweetener (maple syrup and honey), until you reach the perfect temperature.

Which brings up one caveat to the recipe that holds a lot of people back from ever making candy at home.

You NEED a candy thermometer for this recipe.

This is the one I have, but if I were to replace it, I’d get a thermometer with a clip like this so I wouldn’t have to creatively suspend my thermometer in the pot each time.

Heating the syrup to the correct temperature is vitally important to the recipe, so you can’t simply guess the way most of us do with other temperature-based kitchen activities. (When was the last time you took the temp of your chicken before digging in?)

But once you invest the $15 in a candy thermometer, you’re good to go.

Once the syrup reaches the right temperature, you pour it into the bloomed gelatin, turn on the mixer, and watch as magic slowly happens.

The first time I made homemade marshmallows, I thought I completely screwed it up. How does a dark syrup become pillowy, snow-colored clouds of sweetness?

How to make the most epic s’mores bars

I call these “s’mores bars” because, as you can probably tell from the photos, these aren’t your traditional s’mores.

We gave these to our loved ones for Christmas, so I skipped toasting them and fixed the marshmallows to the graham crackers using melted chocolate.

Even if I wanted to toast the marshmallows, I’d be hard-pressed to accomplish that in the middle of winter, in my apartment, with no blowtorch in my kitchen.

To make sure the graham crackers and homemade marshmallows had enough time to set, make both of them the night before assembling the bars (with a caveat, as I’ll get to below).

Obviously, the whole process takes a bit of time because you’re making each “bar” individually.

So, I’ve dreamed up an alternative. But I haven’t tried it yet, so test it out at your own risk! If I wasn’t gifting these out, I’d split the graham crackers in half before baking and make each sheet the size of my 9×9 square baking pan. Once baked and cooked, lay one sheet on the bottom of the square baking pan. Melt half the chocolate and pour onto the graham crackers. Make the homemade marshmallows and pour into the same baking pan. Let the marshmallows set, then pour the remaining melted chocolate overtop and top it all off with the second graham cracker sheet.

I’m looking forward to finding out if that works!

In the meantime, though, let’s dig in to homemade marshmallows and individual s’mores bars.

Graham crackers, homemade marshmallows, and chocolate — need I say more? And these s’mores bars are paleo and gluten free!

For the Homemade Marshmallows

For the Graham Crackers

For the Melted Chocolate

To Make the Homemade Marshmallows

To Make the S’Mores Bars