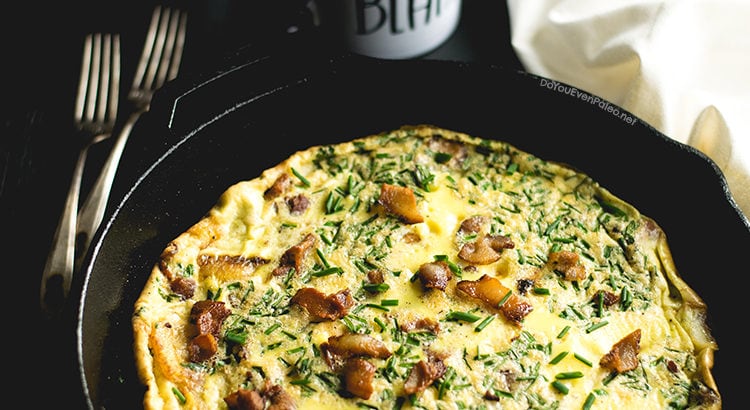 YES—plantains make a return to the blog. What better way to take your breakfast to the next level?

Finding new ways to incorporate plantains into breakfast foods has been on my radar for a while. I’ve been brainstorming, typing up recipe ideas, and testing for months. The internet is full of plantain waffle and pancake recipes, so I thought I’d try something a little different (I hardly make waffles or pancakes anyway).

Honestly, I’ve hit on something here. Sweet yellow plantains pair so well with the savory flavors of crunchy bacon and garlicky chives! Eggs are pretty neutral, so they act as a vehicle and extra protein source for an all-around spectacular breakfast. 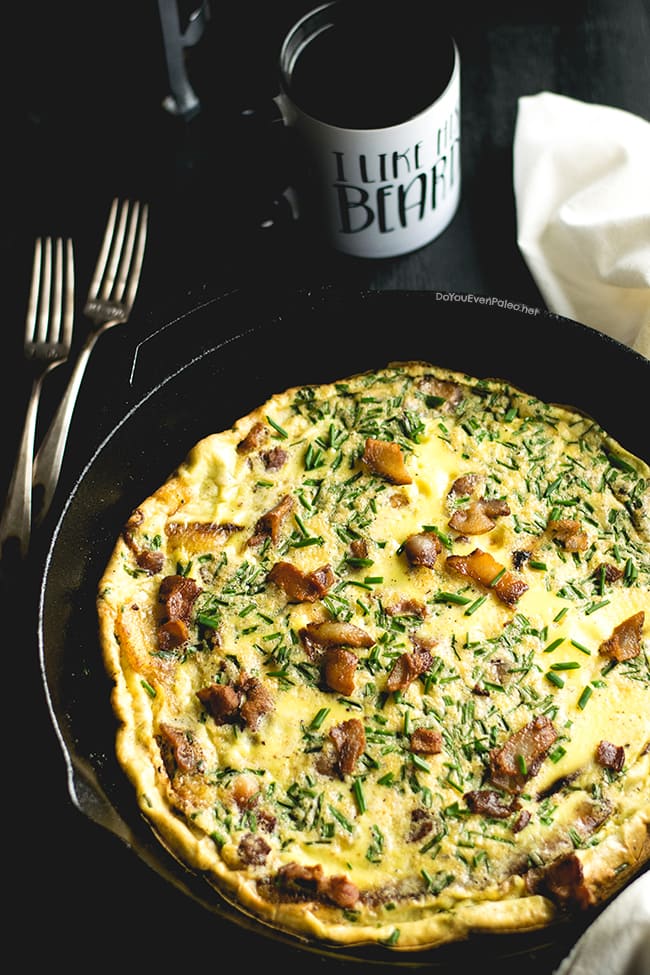 I’ve had this recipe ready to go for a while, but I hesitated to post it. Life took a left turn when my precious cat Loki passed away this last week. He was my companion for over 13 years, and he took his last breath in my arms. I’m feeling much better, but letting him go has been difficult. Somehow, posting a recipe without addressing that just didn’t feel right. Loki would sit on a stool by our kitchen island and watch me cook. He would plant himself right under me as I took pictures of recipes. Sometimes he’d try to sneak a bite. Saying goodbye to Loki has been very hard, but I’ll cherish these memories forever.

Okay. I didn’t mean to push this post into a sad place. This isn’t a sad recipe! Like I said, this has been hard but I’m feeling more normal. 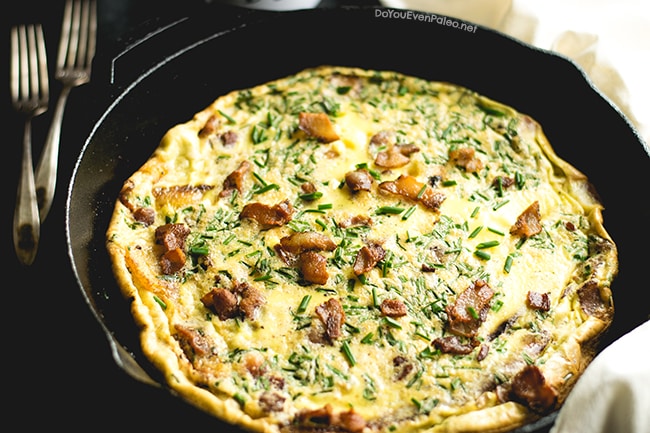 The first frittata recipe I ever posted is still one of the most popular recipes on DYEP. Eventually, I’ll have to retake pictures of that one. But for now, I had more fun creating a whole new frittata recipe with some of my current favorites – plantains, bacon, and chives. I bought I thriving chive plant at the first farmer’s market of the season (in Fargo, the market doesn’t get going until July), and now I throw chives on just about everything! 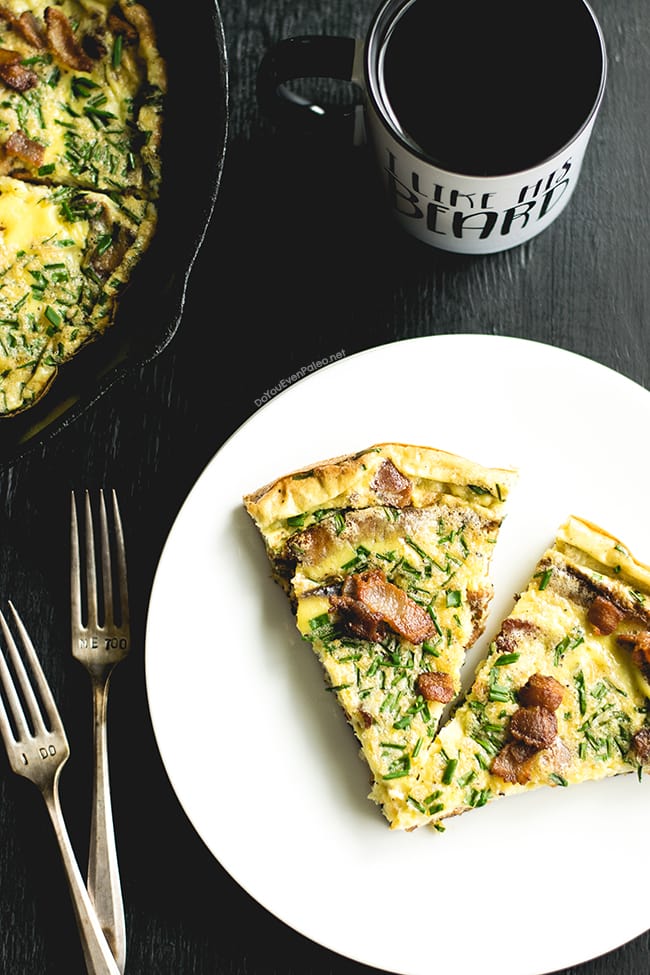 One last thing I should mention before we get to the recipe. The mug you see in these pics says “I like his beard”—it has a companion that says “I like her butt.” Perfect for the man spouse and I! 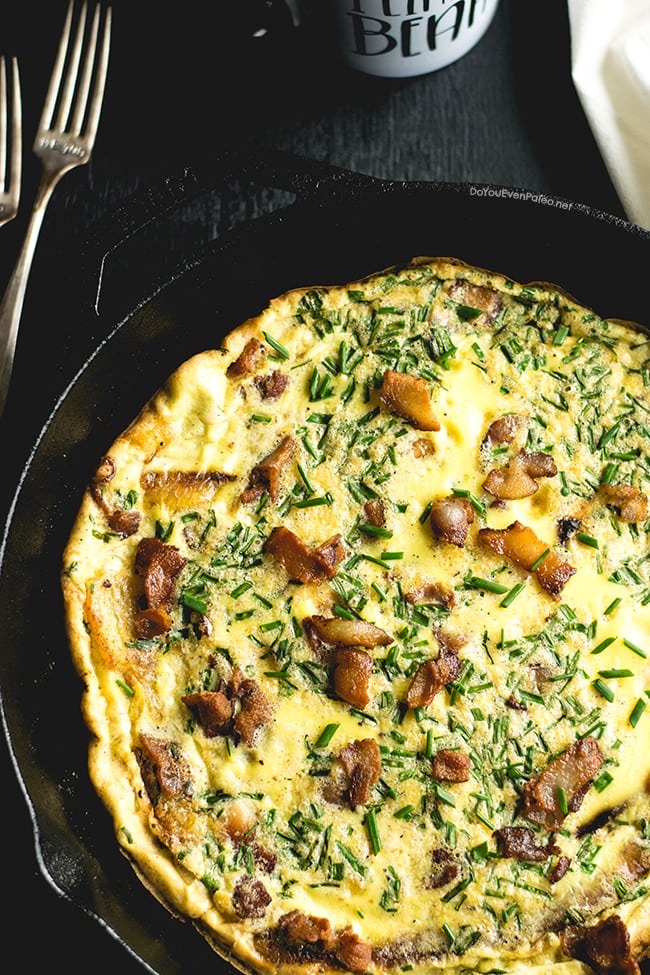 For an extra-fluffy frittata, beat the eggs until frothy just before adding to the pan, while the plantain strips are frying. This adds extra oxygen to the egg mixture that doesn’t have time to escape before you pour it in and cook.