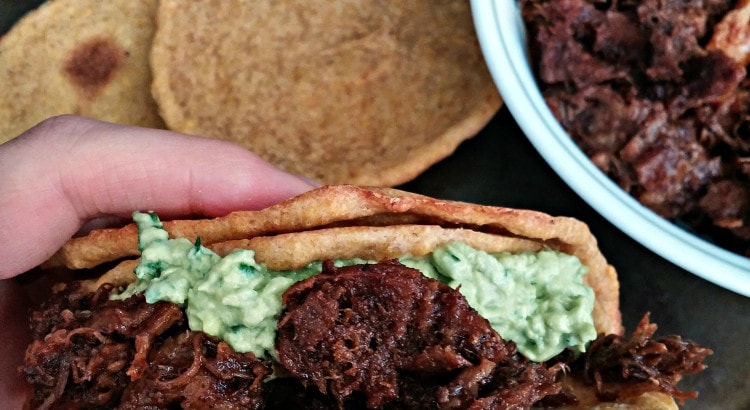 “Pork tongue” tacos may not sound all that appetizing to you. I get that. Kind of. Don’t be afraid, though. Shredded tongue is the BOMB. Trust me!

I made these tacos to fill a void in my life. You see, there’s this small taco and burrito shop called Romo’s in Fargo that my partner and I frequent. Now, having never been to Mexico or certain other southern states, I can’t really say I’ve ever had authentic Mexican…however, my partner claims that this taco shop has the best and most authentic Mexican meat in town. We actually prefer this place over Chipotle, which just opened in Fargo – it’s cheaper, we get more food, and it tastes phenomenal.

When we first went to Romo’s, I spotted beef tongue on the menu and knew I had to try it. I love being adventurous in regards to food. (If only I could apply that zeal to other parts of my life. Ah, well.)

So anyway, I tried the shredded beef tongue and absolutely fell in love. Salty, spicy, not dry at all…oh man, I still have dreams about this stuff. For a few weeks, we frequented Romo’s and I got the beef tongue every time.

Until One Unfortunate Evening…

…when they told me they didn’t carry it anymore. I asked why. Apparently, a few people complained that the beef tongue was “too close” to the other meat. I wish I knew who those people were, just so I could angrily flip a table and walk out in front of them. Frankly, I still don’t understand why you would complain about something like that. It’s like

To be fair, I’m guessing they didn’t sell a lot of it either. It was seriously the best meat they offered (even though the rest is phenomenal too), but too many people are scared off just because of what it is. What. A. Shame.

After grieving about the loss of the amazing shredded beef tongue for a few days, I realized that I had a couple pork tongues in the freezer. Why? Because offal is cheap, cheap, cheap. I think each pork tongue, about 1lb each, cost me less than $2. Yeah – grass fed, organic, pastured pork for less than $2. I tend to have a lot of offal on hand.

I wanted a replacement for the amazing shredded beef tongue I had loved at Romo’s, but I also wanted the entire process to be super easy. Like, so easy that you don’t have an excuse not to make it. So I threw it in the crockpot with some spices and shredded it with a couple forks after about 6 hours.

Then I made up an equally lazy Cilantro Avocado Creme to top it off. It’s damn delicious. This entire meal is so incredibly easy!

Now, I’ve seen tongue recipes that tell you to trim away some bits. I didn’t bother with that. Again, I wanted this to be easy. You don’t have to mess around with the tongue before putting it in the crockpot ( I know that grosses some people out). The outside skin did get a little tough while cooking, so at first shredding was a little difficult. But I kept at it and eventually it tore apart. If you want to avoid this, you could add 1/4 cup or so of broth. I didn’t just because I didn’t want the end result to have too much moisture, but there’s nothing wrong with adding it.