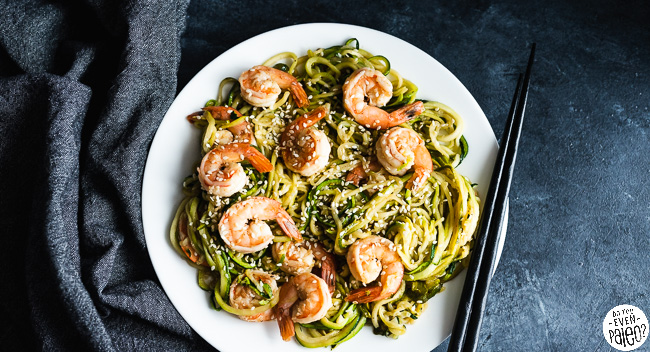 This Sesame Shrimp Scampi with Zucchini Noodles makes a wonderful weeknight meal! It uses one pan, cooks up in less than 10 minutes, and uses ingredients you probably already have in your pantry.

Beyond that, this shrimp scampi recipe is paleo and Whole30 friendly.

You don’t need a spiralizer for this recipe. Not going to lie to you! You can still make zucchini noodles the way I did for this old recipe, using just a vegetable/julienne peeler.

However, a spiralizer is going to make your veggie noodle life SO much easier! Spiralizing takes much less time and produces more visually appealing noodles. (And if you don’t think visual appeal matters, I’ll point out that a BIG reason you’re checking out this recipe has to do with the picture.)

So pick up a spiralizer for this recipe if you don’t already have one.

I’ve tried out a few different brands over the years, always getting a new one when a previous model broke. This year, though, I got a new one that I’m crazy happy with!

By the way. Not sponsored at all. Just sharing the love in case you want to join in on the veggie noodle fun!

Don’t think you’ll use it? I was worried about the same thing. But now I use it all the time for zucchini noodles and sweet potato noodles — and I have all sorts of ideas for future recipes.

How to make zucchini noodles

Whether you use a spiralizer or julienne peeler, zucchini noodles can be kind of…tricky. If you’ve made them before, you know that cooking them releases a LOT of water. If you try to cook the water off, your beautiful zucchini noodles turn mushy. Not. Fun.

Now, I don’t want to set you up to expect that I have the perfect method for making zucchini noodles that are indistinguishable texture-wise from normal pasta. Not gonna happen.

BUT, you can help yourself out a bit by salting the zucchini before you cook it. Which is not that much to ask for this recipe, since you’ll be brining the shrimp anyway.

Essentially, all you’ve got to do is sprinkle a little salt on the spiralized zucchini and let it sit for 10-15 minutes. Then gently squeeze out some excess water. You don’t want to squeeze every ounce of moisture out of the zucchini noodles or they’ll still end up mushy and lifeless.

Easy and flavorful, this weeknight sesame shrimp scampi with zucchinin noodles recipe is paleo, whole30, nut free, and ready in under 40 minutes!

For the Sesame Vinaigrette: