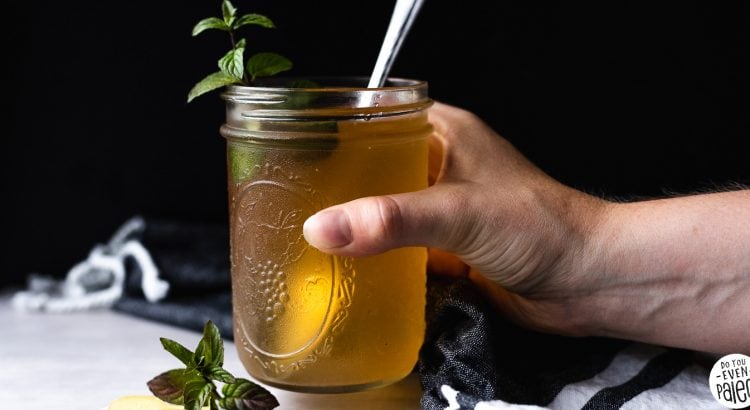 Hop on the trend train with this Simple Ginger Switchel Recipe!

Much like kombucha a few years back, switchel is beverage straight from the history books that’s making something of a comeback. And the good news — switchel is surprisingly easy to make at home!

What the Heck Is Switchel?

Simply, switchel is a vinegar-based drink often made with water, apple cider vinegar, ginger, and a sweetener. Traditionally, molasses was used to sweeten the drink, but maple syrup and honey were also popular choices.

Historians debate where switchel originated, but most name its origin as The Caribbean Islands. Despite that, though, the drink became synonymous with American culture — more so than apple pie.

Water was not always safe to drink back in the day, so people came up with other options. Switchel became popular because it’s tart and sweet, was cheap to make, and provided a “burn” thanks to the ginger that was similar to alcohol without the unproductive side effect of intoxication.

Laborers, farmers, and enslaved workers drank switchel while out in the fields. On the flip side, the tart drink was common among politicians and Harvard students, too (who spiked it with rum).

Early American Switchel-lovers were ahead of their time!

More recently, the world has dubbed switchel “nature’s Gatorade” because it helps replenish electrolytes and quench thirst. Let’s break it down:

Electrolytes are minerals in our bodily fluids that carry an electrical charge. They transmit the voltage necessary for things like muscle contractions and nerve signalling. You lose electrolytes anytime you expel bodily fluids —like through sweat or urine.

Electrolyte imbalance can lead to sore muscles, nausea, dizziness, fatigue, trouble concentrating, and more. You can see why electrolyte drinks are so popular and important for athletes, vigorous exercisers, and physical laborers!

You can easily replenish your body by consuming foods or drinks that contain electrically-charged minerals like calcium, potassium, magnesium, sodium, and chloride.

Turns out apple cider vinegar, the star ingredient of switchel, is rich in potassium! Plus, pure maple syrup contains potassium, magnesium, sodium, and calcium. So this drink makes an excellent all-natural alternative to sugar-packed sports drinks.

Inflammation is at the root of many biological issues. I’m especially concerned with inflammation because hidradenitis suppurativa — read more about that here — is an inflammatory skin condition.

So how does switchel help? Ginger, one of the key ingredients in this switchel recipe, naturally suppresses inflammatory enzymes.

On top of that, ginger has an active component called gingerol. Gingerol works as a natural pain-reliever.

Remember when the internet went crazy over the “miraculous” health benefits of apple cider vinegar?

Well, the stuff isn’t going to cure every ailment that comes your way, but ACV does have some sweet benefits.

Raw ACV with the mother is a source of potassium, magnesium, and probiotics. It also helps balance the body’s natural pH levels and keeps blood sugar levels in check.

Apple cider vinegar is the star ingredient of homemade switchel, so it’s a great way to get your daily dose of ACV!

How to Make Homemade Switchel

Sold on the benefits? Let’s move on and make some switchel!

Seriously, this good-for-you beverage is surprisingly simple to make. Once I started testing it out, I couldn’t help but shake my head that I had never tried it before.

Assemble your ingredients — you only need four, and one of them is water. Apple cider vinegar, fresh chopped ginger, pure maple syrup, and water. SIMPLE.

Combine all the ingredients in a large jug or carafe. Cover and let sit at room temperature overnight. Finally, refrigerate and drink when cool.

You can add more water to dilute it if the vinegar taste is a little strong for you. Personally, I like drinking it as a more concentrated “shot”.

This simple ginger switchel recipe creates a benefit-rich beverage perfect for beating the heat of summer. Switch it up by using honey instead of maple syrup or by adding fresh herbs (like mint) and fruit (like blueberries)!

Combine all ingredients in a large jug or carafe. Cover and let sit at room temperature for 12 hours to overnight. Pour through a fine-mesh sieve to separate the ginger chunks out of the switchel. Refrigerate until ready to drink!