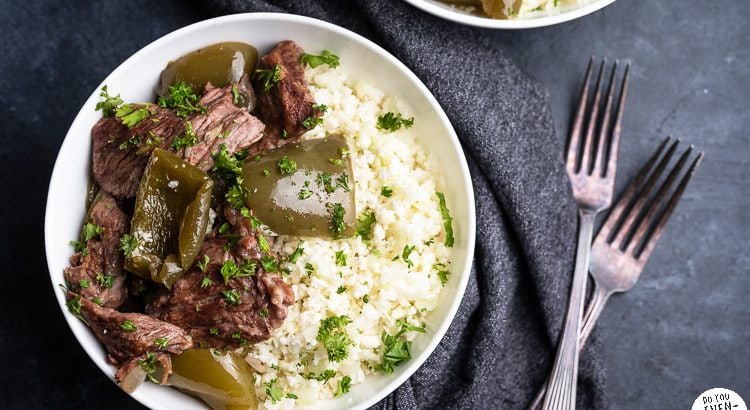 Make your own chili sauce and this slow cooker meal is easily Whole30-friendly!

My cut of choice for this slow cooker recipe? Beef chuck roast.

Frankly, this isn’t the popular choice for pepper steak. Typically, you’d use sirloin steak or sirloin roast, which is a much leaner (and more expensive) cut of meat.

Beef chuck isn’t a prized cut by any means. Actually, it’s one of the tougher parts of the cow, which makes it an uncommon choice for steak… but a perfect choice for slow cooker recipes!

If you choose, you definitely can go with sirloin. But for now, I’m opting for the less expensive cuts. For slow cooker recipes, I find there’s not much of a difference!

You got me. Historically, some of my recipes get a little complicated. For the average, busy, non-food-blogging individual, spending an hour or more prepping and cooking dinner each night isn’t in the cards.

I get that. So I’m trying to focus a little more attention on simple, quick-to-prep recipes. Of course, that means slow cooker recipes!

This slow cooker pepper steak recipe has 12 ingredients (including the basics like salt and pepper), but most of the ingredients are pantry staples for me. I always keep ingredients like coconut aminos, broth, and onions around, so all I had to pick up at the store were beef chuck and green peppers.

Once you’ve got the ingredients assembled, the whole cooking process is as simple as it gets thanks to the slow cooker. A few hours of cooking and you’re good to go!

You can take an extra step to thicken the sauce, but it’s completely optional.

What to serve with slow cooker pepper steak

To keep this Whole30, I’d serve this with cauliflower rice OR mashed potatoes.

But if you eat white rice, it’s definitely a great match. Other options include zoodles and cauliflower match. So you’ve got lots of options.

At minimum, you’ll want something to soak up that spicy sauce!

With a little prep and a stint in the slow cooker, this paleo pepper steak recipe is surprisingly simple! For a Whole30 version, you’ll have to make your own chili sauce, but if you like a little heat it’s well worth the effort.