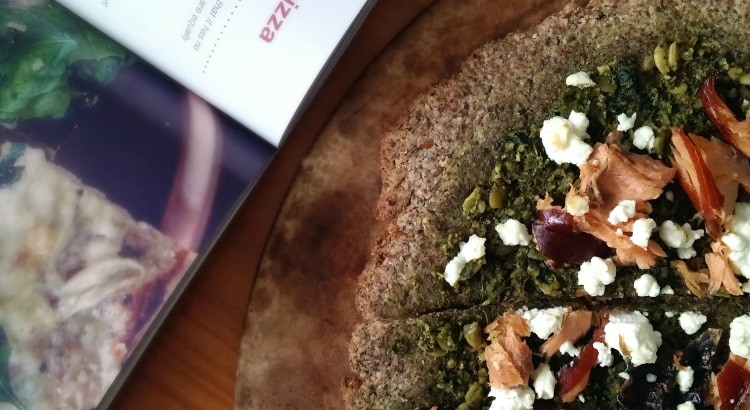 I was perusing Instagram one night when I happened to see a post from @brittany_angell asking food bloggers to identify themselves. I hardly consider myself a food blogger — updating once a week is lucky for me, and my lack of DSLR makes my pictures fall short of my own standards. But, I like sharing recipes, and it’s something to do in my free time. So I commented on the post, identifying myself as a novice food blogger.

To my amazement, @brittany_angell herself commented on one of my pictures, telling me she loves my blog name and wanted to send me an advance copy of her book, Every Last Crumb: Paleo Bread and Beyond

! Starstruck, I almost squealed like a child. And that doesn’t happen often. In case you didn’t know, Brittany Angell is a gluten free baking genius…probably most popular for her insane paleo crispy waffle recipe. 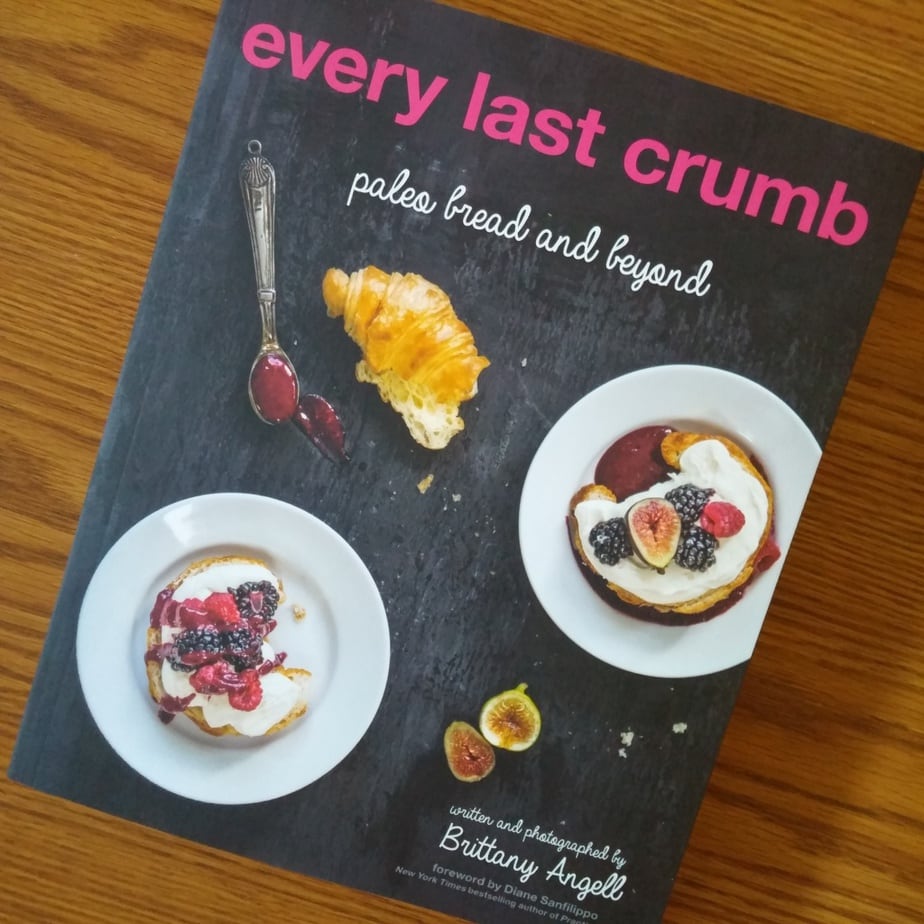 Although I was never asked to review the cookbook, after receiving this stunning piece of work I feel like it’s necessary. I’ll just jump right into it!

The photography is absolutely stunning. I love that there is a picture for each and every recipe! Each picture makes me want to try out the recipe…which I can’t say for all cookbooks. I haven’t even missed bread or other grain-based products much while eating paleo, but the photography in this book make me wonder “why don’t I eat croissants every day?”

I have made three recipes from the book so far. First, I made the arepas, because they were incredibly easy and I happened to have all the ingredients on hand. Um…yum! They were great stuffed with a chicken salad for dinner, and great in the morning with egg and bacon inside. Plus, they were a cinch to make and had that wonderfully chewy bread texture!

Next up, I felt I had to try one of the sweeter recipes. I picked the Cherry Chocolate Chip Scones…but cherries aren’t in season, so I used fresh cranberries instead. I also can’t find maple sugar anywhere around here, so I used coconut sugar. Even with my substitutes, these scones were the bomb. I even proudly brought them with when I visited my parents over Thanksgiving weekend (I’m amazed I didn’t eat them all before then!) and everyone agreed they were awesome. Oh, and my parents and siblings aren’t even close to paleo. 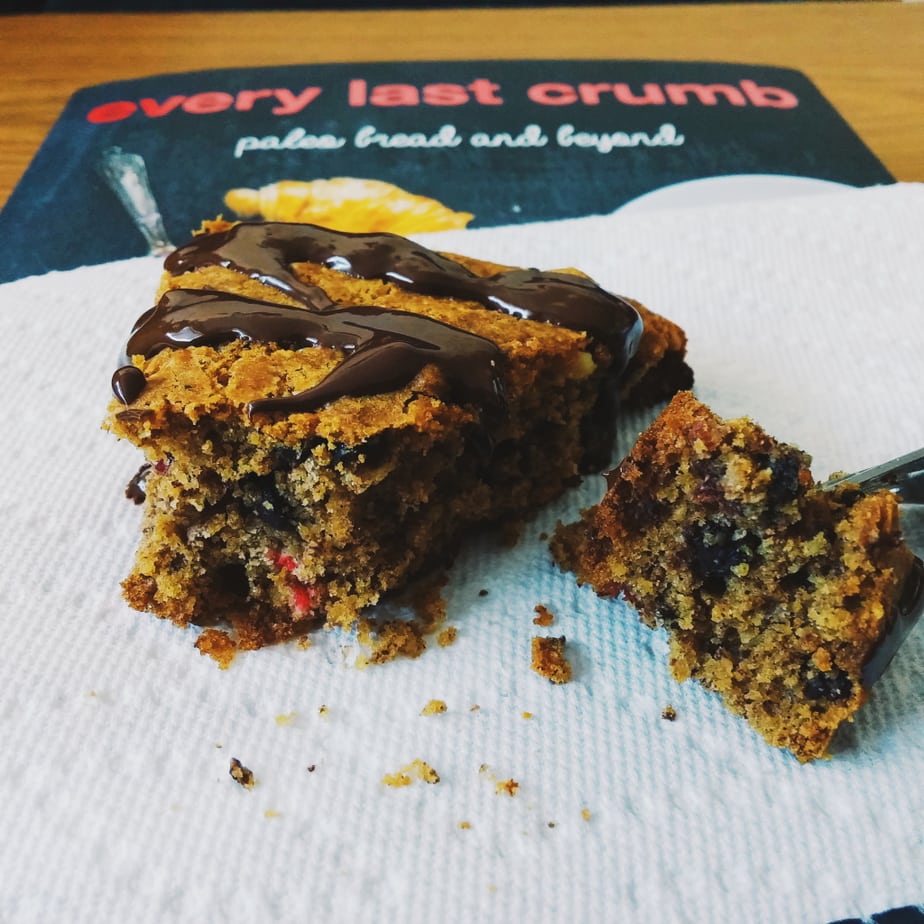 Finally, I made the crust from the “Thin Crust White Pizza” recipe. Once again, I made a few substitutions. I don’t keep flax around my apartment, so I subbed in ground chia seeds. The color ended up being a little off as a result, but this was definitely one of the best pizza crust recipes I have ever made. Hands down. It was nicely crisp on the outside but still somewhat chewy. It had a crunch without a hard, cardboard texture. Basically, it rocked. It held up wonderfully under my ingredients, even as a thin crust! I’ll definitely be using the recipe again! 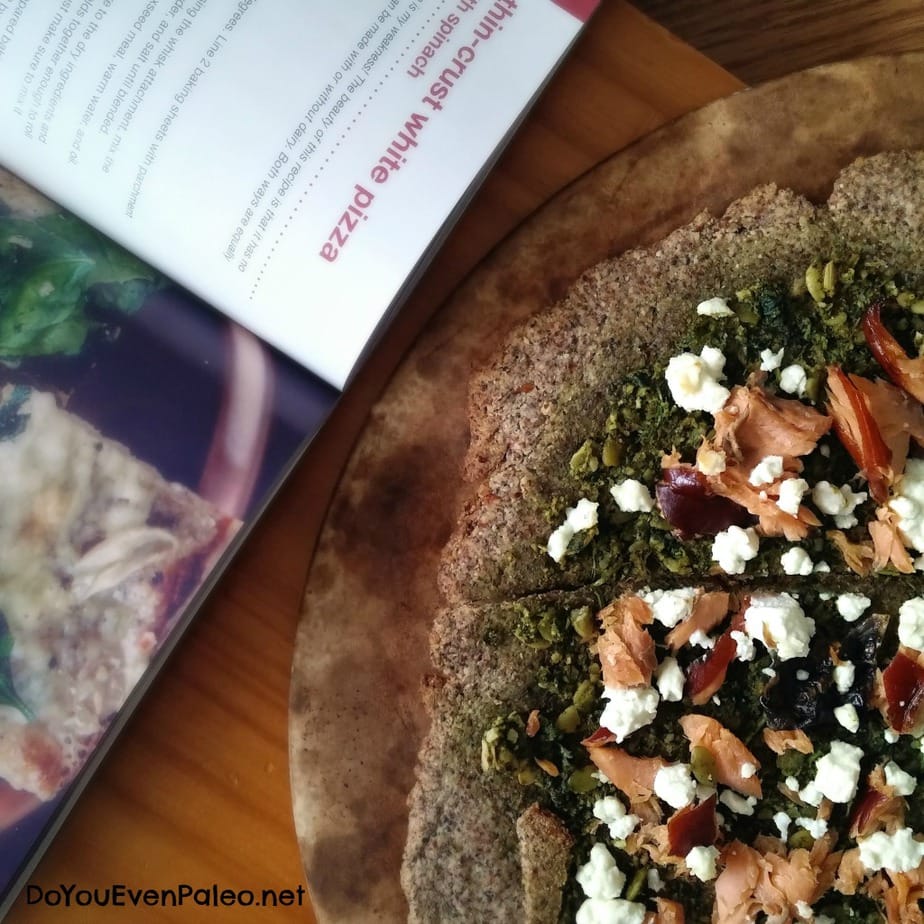 Oh, and did I mention that the pizza I made was a Smoked Salmon and Goat Cheese Pizza? With cilantro pesto as the sauce? I’m sharing that recipe below!

But before that, we need to have a real talk.

There are some ingredients in Every Last Crumb that I just don’t like. And there are a lot of people that probably won’t like them. I’m talking about xantham gum and guar gum. To me, they just aren’t paleo (The Paleo Mom has a great write-up about why). They might fit some peoples’ paleo/gluten free template, but I try to avoid gut irritants and highly processed foods in my everyday diet. Why are they in the recipes? Well, they’re a gluten-free way of replicating gluten. Which is hard to do with just almond flour, eggs, and baking soda!

While I might make some of the recipes from Every Last Crumb that call for these ingredients very sparingly, I’m drastically less likely to ever try them because of those ingredients. I feel that’s worth sharing. Because not everyone would agree that the croissants are paleo knowing that they use xantham/guar gum. Maybe it doesn’t matter to you…okay. My point is, don’t expect to be able to make everything in this book if you follow a paleo lifestyle for optimal health or are actively healing a leaky gut.

That said, there are still plenty of recipes in this cookbook that don’t use those ingredients! And frankly, I think the quality of the recipes that don’t use xantham/guar gum outweigh the disappointment I had when I saw so many recipes that do use them. Plus, Brittany is excellent about writing in where you can use substitutions and how it might affect the overall recipe.

Frankly, it’s obvious that Brittany Angell poured her heart and soul into this cookbook. It’s gorgeous, there’s an insane variety of recipes, and she went totally over the top when preparing for food allergies (each recipe is labeled nut-free, egg-free, etc.). I’m so impressed, and I am happy to add this cookbook to my gluten free/paleo arsenal.

If you’re interested in the cookbook, find it on Amazon, Barnes and Noble, or select Costco stores! It just came out yesterday!

If you want to try out some recipes before you buy, you can check out the PMS Brownies on PaleOMG, Brittany’s Chicago Deep Dish Pizza on Fed and Fit (although be aware that this recipe calls for xantham/guar gum), or her English Muffins on Slim Palate (also contains xantham/guar gum).

Okay, now that that’s over…I want to share the recipe I came up with using Brittany Angell’s amazing thin crust! The recipe in the cookbook does have suggested toppings, as well as a white sauce recipe, but I didn’t have all the needed ingredients on hand (that’s like every day of my life!) so I came up with something else. And I was not disappointed! Unfortunately I don’t have permission to share the crust recipe, but you can use any thin crust recipe you like. Or just buy Every Last Crumb and get the recipe that way! 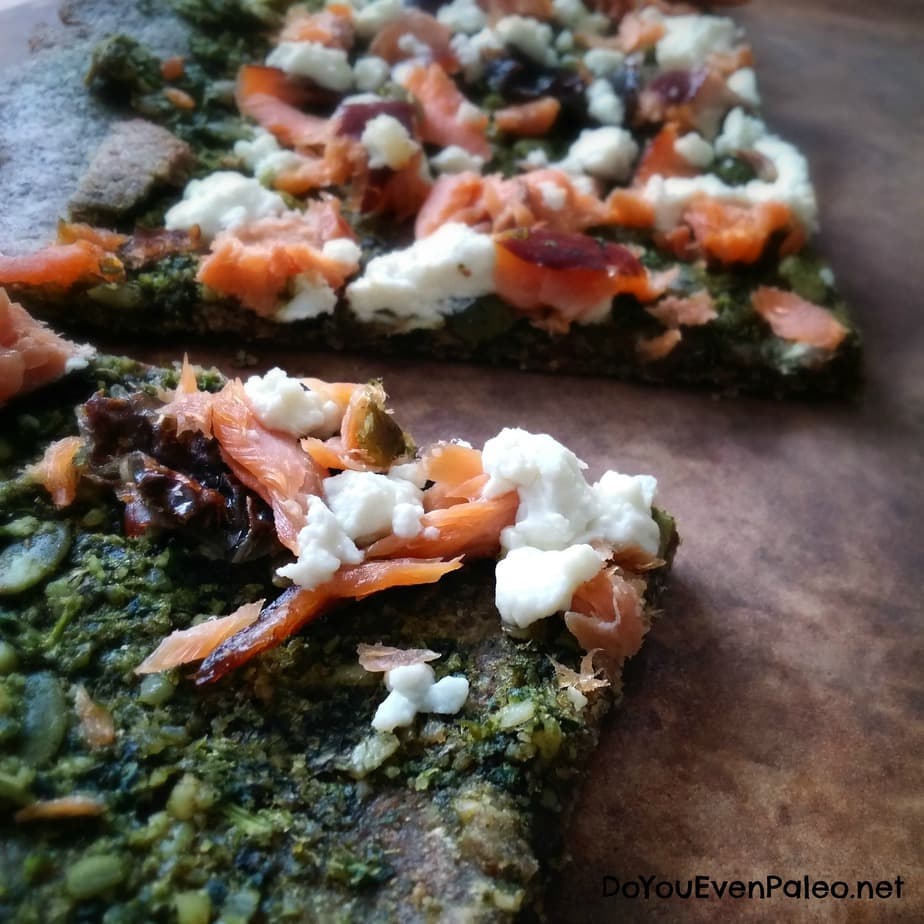