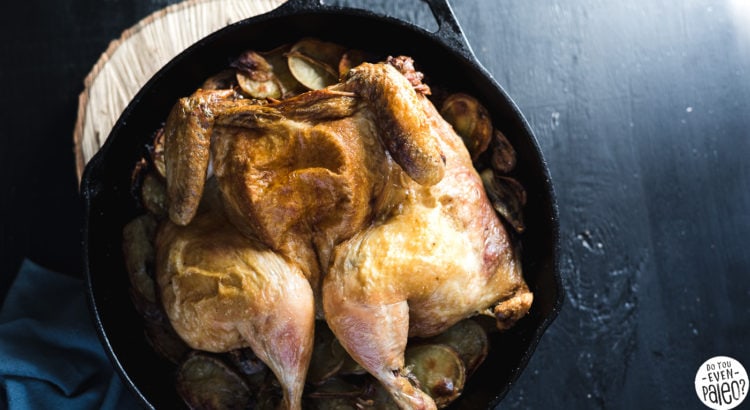 Today, we’re bringing it back to basics on the blog with Spatchcocked Roast Chicken with Potatoes – a Whole30 meal I make nearly every dang week. And I’m finally sharing how I roast an epic chicken so you can make this surprisingly simple dinner yourself!

I’ve heard over and over again from friends that they don’t like roast chicken. Of course, that always comes as a big surprise for me… But when I ask why, they usually admit that they don’t know how to roast a whole chicken. (I usually get quite the look when I mention spatchcocking, too.) Their distaste of chicken comes from tossing a package of plain chicken breasts into the oven and roasting them into a dry, unflavorful mess.

Of course, when I find this out, I start eagerly advocating for whole, skin on, perfectly roasted chicken. And though I rattle off the basics right then and there, I’m finally giving my go-to roasted chicken with potatoes recipe a permanent place on DYEP. 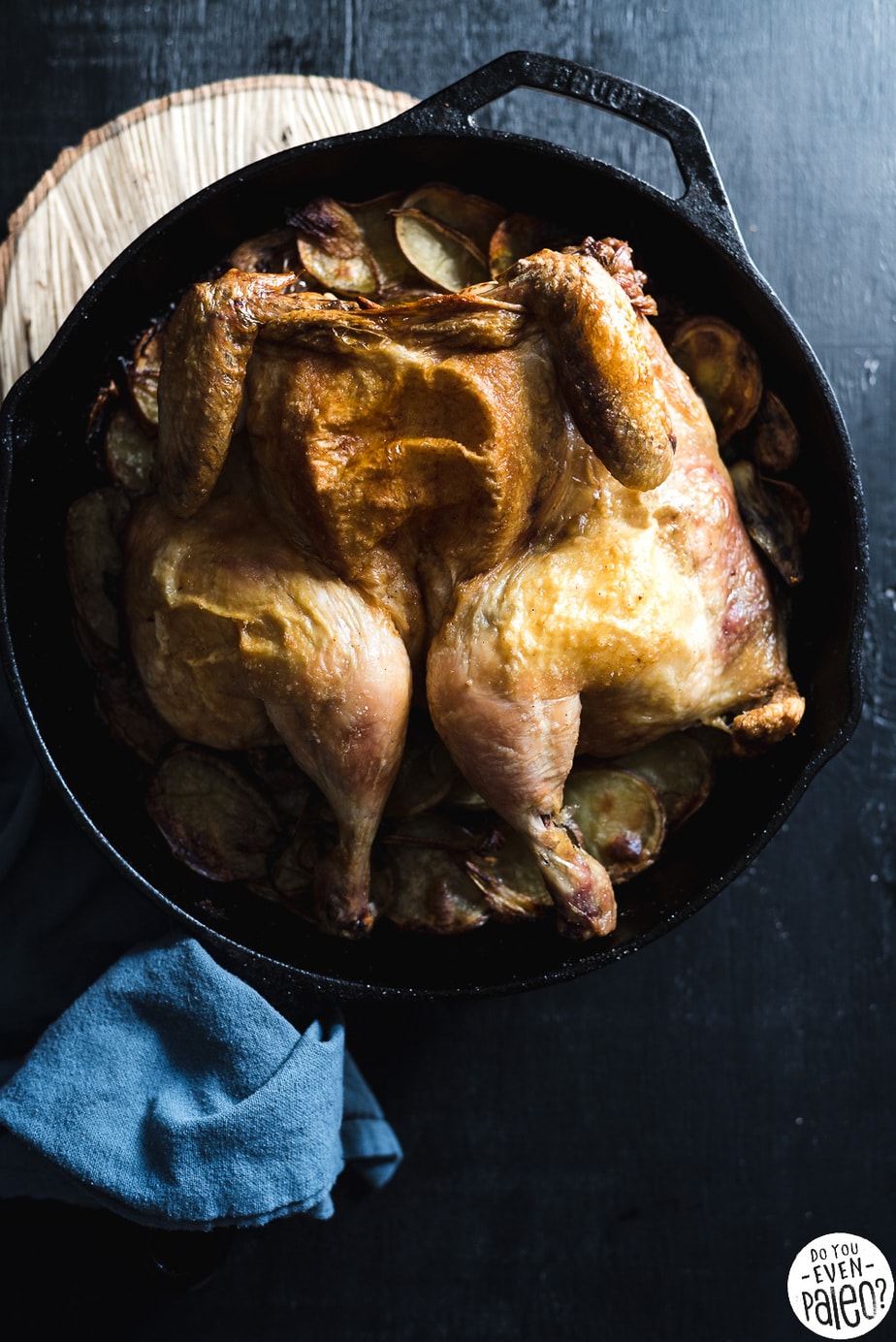 After all, spatchcocked roast chicken is one of the spouse and my favorite meals. And for several practical reasons.

First off, those roasted chicken thighs are pure gold of weeknight eats. Whenever we roast a chicken, we eat the thighs that night. Cooked to perfection with that golden, crispy skin… Few foods top that in our books.

Second, that skin. Okay, so I know a few people who don’t like chicken skin. To each their own… except that that’s just wrong. When cooked right, chicken skin is amazeballs. Crispy, buttery, and salty. 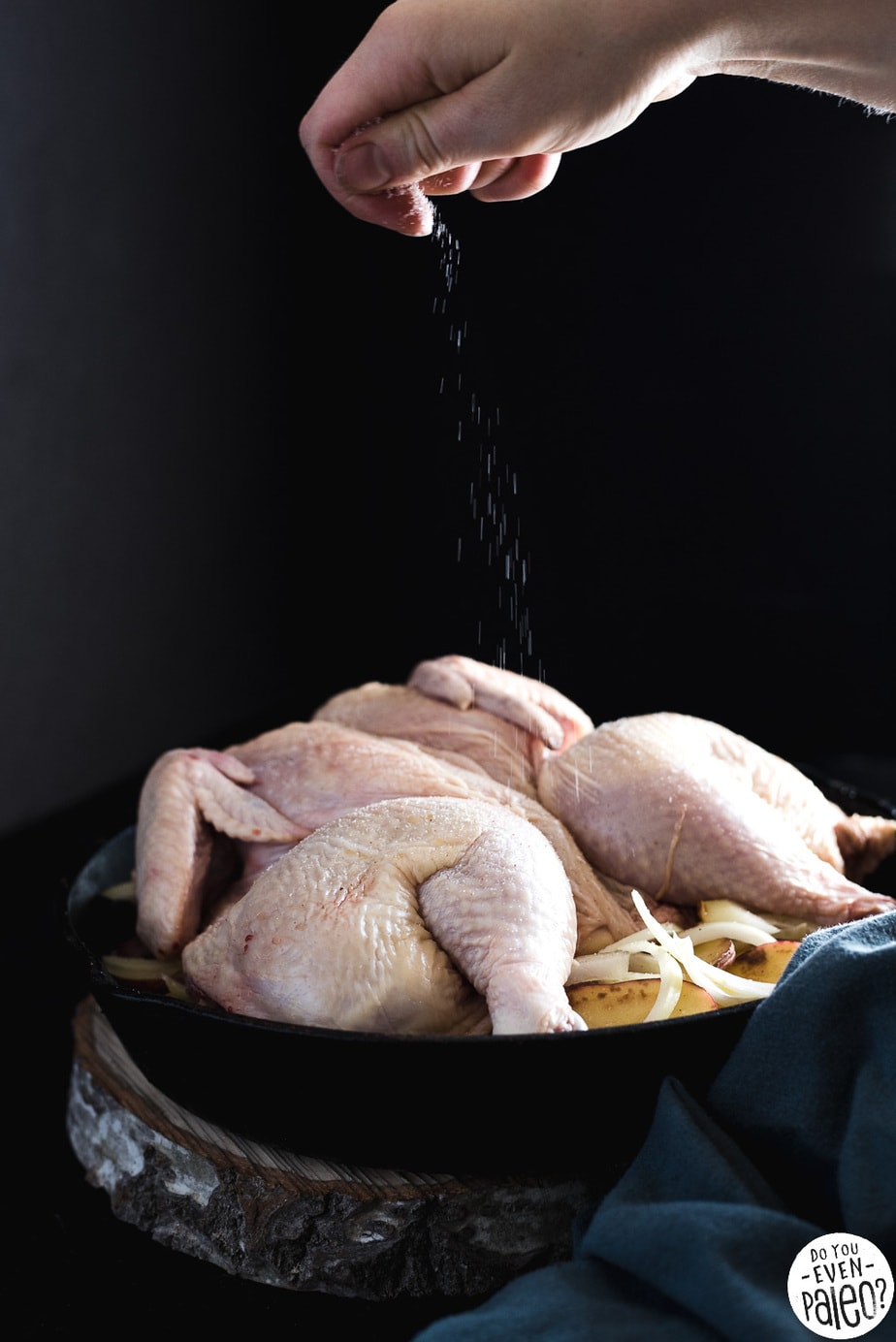 Then we reach the aftermath. Leftovers! We eat the thighs after the chicken’s done, and the wings, breasts, and rest of the meat is ready to be eaten throughout the week.

If you follow me on IG, the chicken breasts in my salad are from leftover roast chicken 87% of the time. Otherwise, I might shred up those chicken breasts for buffalo chicken smothered sweet potato fries or any other recipe that calls for shredded chicken. The leftover chicken isn’t crappy dry stuff either. These breasts are perfectly juicy and moist (yeah, I said it).

But the meat itself isn’t the only leftover. I save the carcass and bones of the roast chicken to make bone broth later. Usually I just shove the bones in a freezer-safe bag for another day. Then when I get the itch to make bone broth, I take a bag with a couple frozen carcasses in it and toss it in my dutch oven with water and a little apple cider vinegar. A few slow-roasted hours later, and I’ve got bone broth! 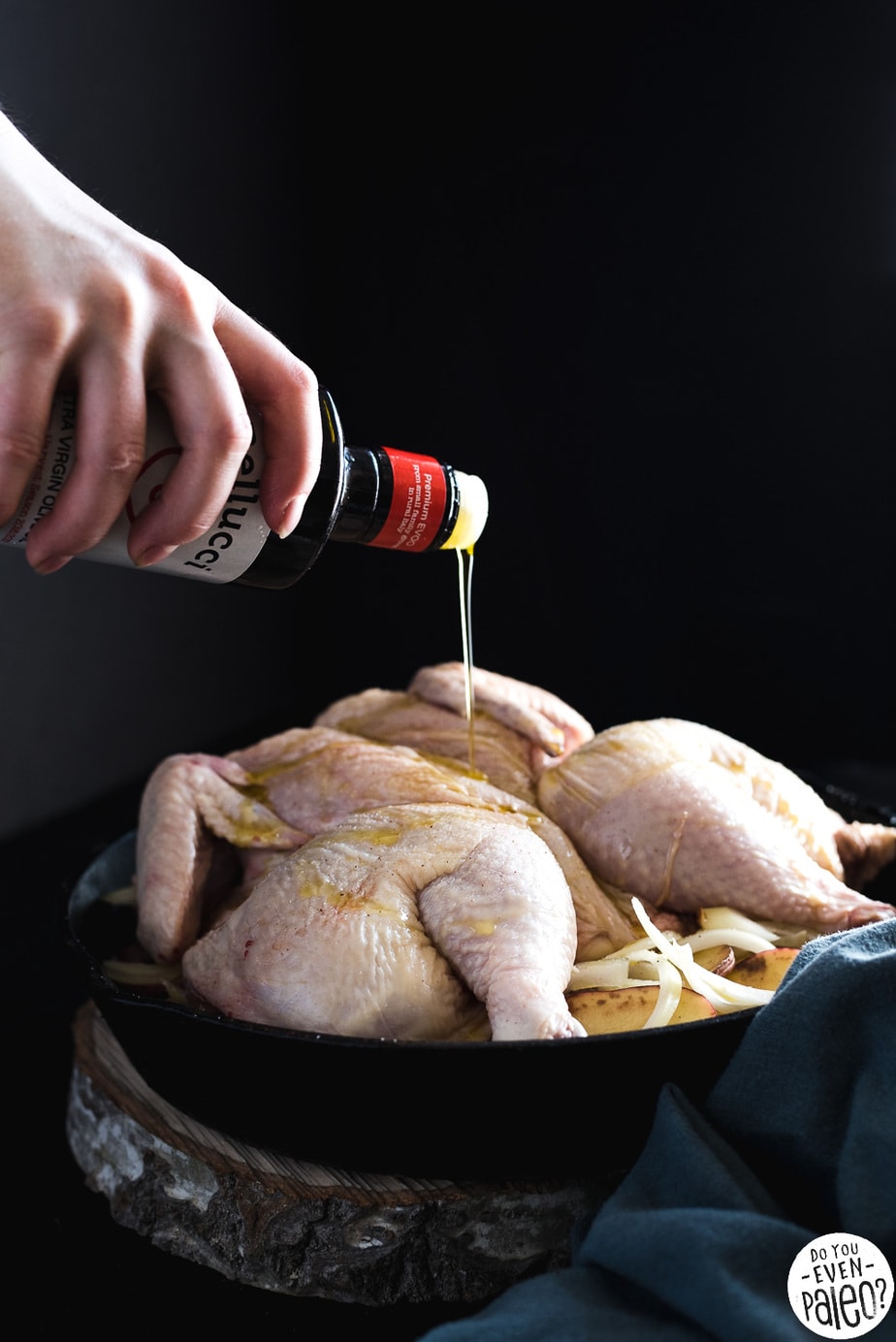 Oh, you thought the perks stopped there? They don’t.

To kill two birds with one stone, I started roasting potatoes along with the chicken. It’s a phenomenal combo for two reasons: the chicken juices give those potatoes a massive umami boost AND you’re using only one skillet to cook the whole meal (less dishes)!

Side note: that first night, when we eat the thighs, I usually accompany the chicken and potatoes with a salad. Gotta get those greens, too!

Let’s jump in, shall we? 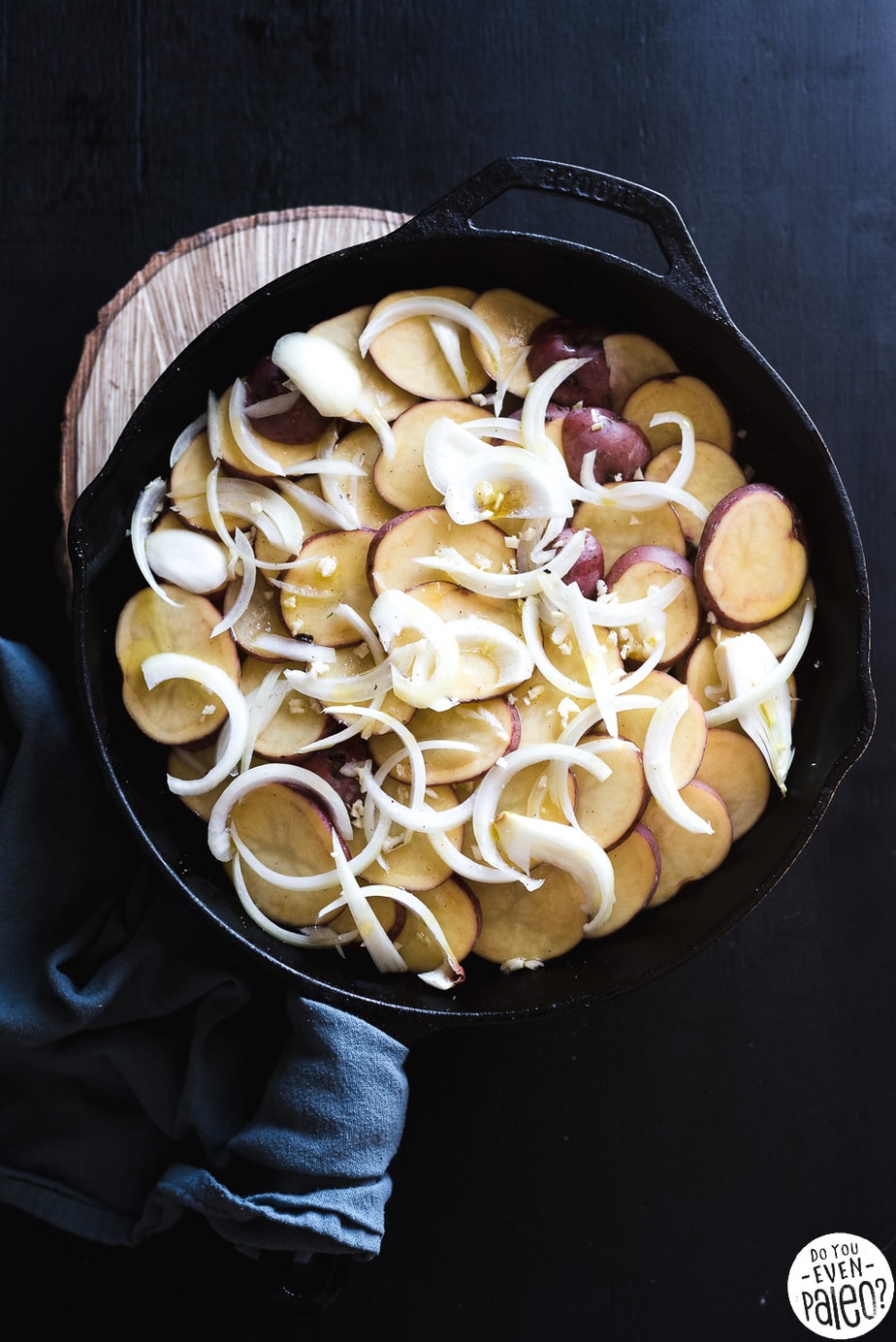 First I prepare the potatoes. I slice ’em thin and layer them in a pretty spoke-like pattern along the bottom of my cast iron. I add sliced onions and sprinkle them with minced garlic.

Then I spatchcock the chicken. Listen, I know it seems like a lot of work. It might look super gross to you. But trust me, it’s worth it. And seriously, this is just food. There are worse tasks in the world (changing a baby’s diaper, anyone?). Basically, take some super sharp kitchen shears (these are the exact ones I have!) and cut along right beside the spine. You’ll probably notice there’s a path up the spine that just “feels right”.

You can either cut on both sides of the spine to completely remove it, or just cut one side to open up the bird. Then, flip the chicken over and cut the sternum cartilage so you can flatten the chicken out more easily.

Put that chicken on top of the potatoes in the skillet. Sprinkle generously with kosher or sea salt and drizzle with olive oil or ghee. Rub the fat and salt into the skin (bonus points if you slip under the skin and rub a little more directly onto the meat) and we’re ready to go!

In about an hour of roasting, you’ve got perfect – and yes, I mean perfect – chicken.

At this point, I usually remove the chicken from the skillet and let it rest on a plate. Meanwhile, I return the potatoes to the oven so they can really crisp up.

Then we load up our plates with crispy potatoes, a chicken thigh, and a simple salad. And we feast.

And though it might seem like a huge project the first time you do it, this seriously gets easier and faster each time you do it. I can get a spatchcocked roast chicken with potatoes in the oven in less than 20 minutes of prep now. 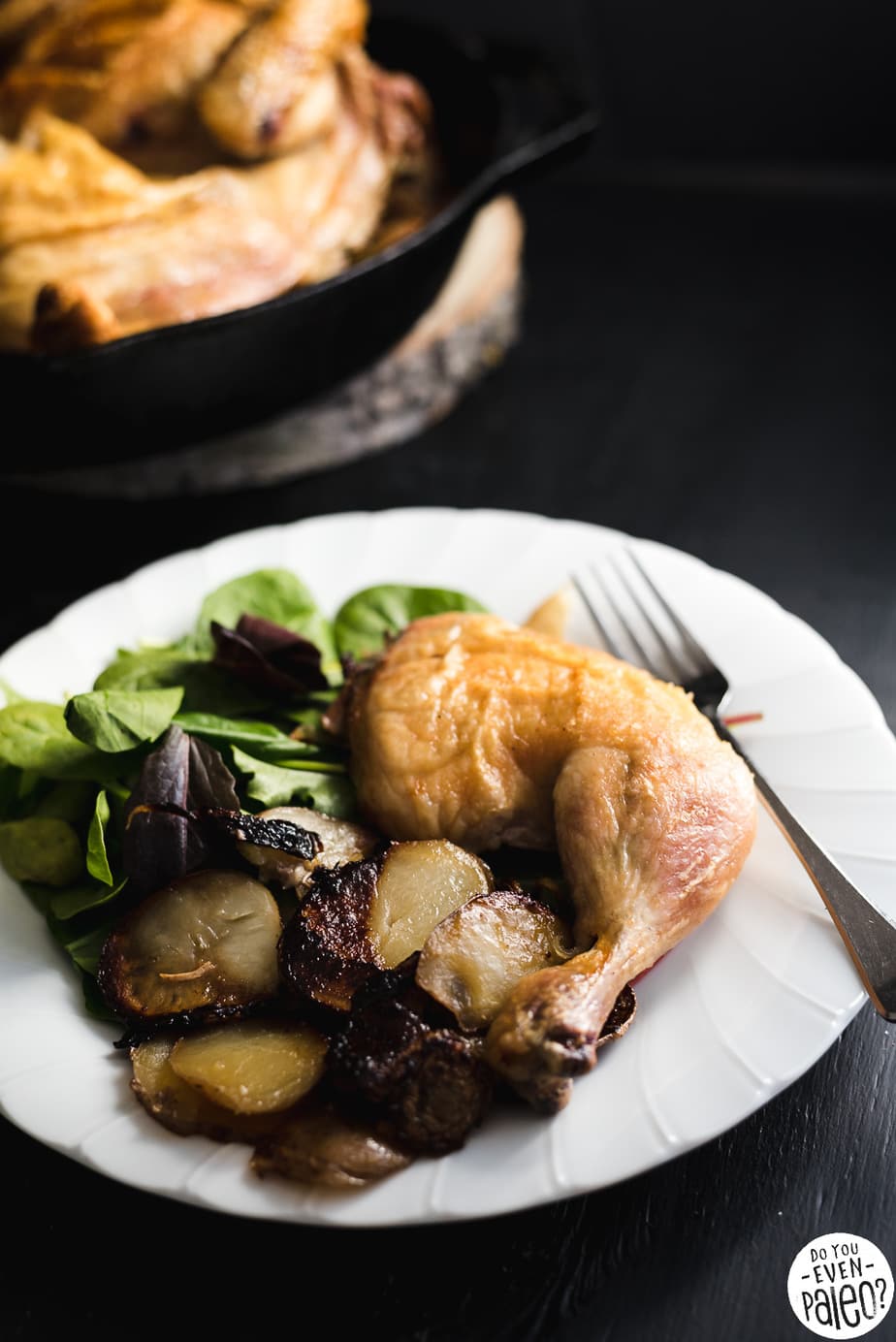 Put Your Own Spin on this Recipe 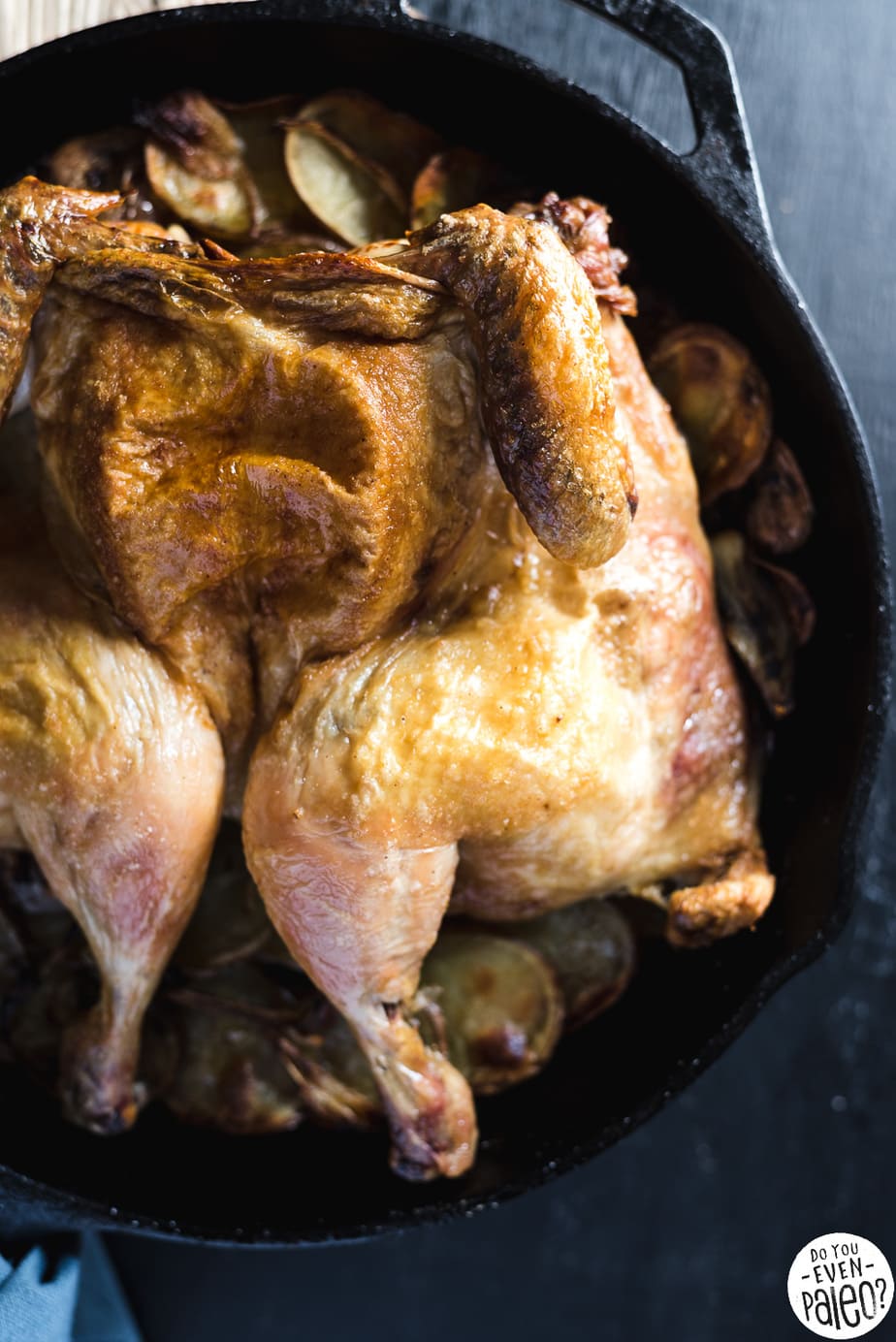