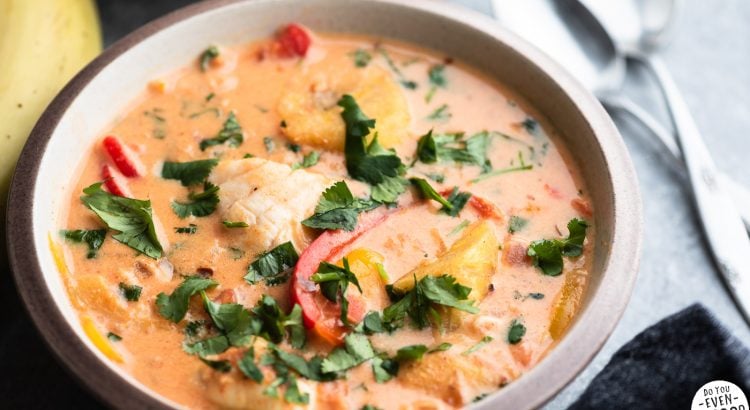 I’m not sure where I first heard about Moqueca aka Brazilian Fish Stew, but I’m definitely glad I decided to give it a try.

This creamy, coconut milk-based cod and plantain stew is paleo, dairy free, keto, and Whole30. But my favorite part is the full spectrum of flavors and colorful veggies!

Moqueca is a Brazilian recipe containing salt water fish, tomatoes, onions, garlic, and coriander. Traditionally, you’d cook moqueca in a terra cotta pot. (But spoilers, I don’t have one. I used a dutch oven).

In addition to the staples of fish, tomatoes, onions, and garlic, I’ve added plantains. Because duh, I love plantains.

And damn, is this Brazilian fish stew good! Plantains and cod make such a good combo. Veggies like bell pepper, cilantro, and tomato add wonderful color and flavor.

How to ensure fast and easy cooking

This one’s simple and fun, as long as you’re game for a little prep work. The bulk of the recipe is in the prep, so my best advice is to get comfortable with mise en place.

Not familiar with that term? “Mise en place” is a French culinary phrase meaning “everything in its place.” Essentially, it means reading through a recipe and prepping all the ingredients before actually beginning step 1 of the instructions.

Frankly, mise en place is the unspoken step 1 of any recipe. I guarantee it makes cooking much less stressful and a helluva lot faster!

How to make Brazilian fish stew

Just like so many other soups and stews before, making this paleo Brazilian fish stew recipe couldn’t be easier!

First, assemble your ingredients and prep them (mise en place — see above!). Next, you’ll start marinating the cod in some finely minced ginger and lime juice. Then, you’ll saute the veggies in the soup pot until they’re tender. Finally add the fish, broth, and coconut milk, finishing with a simmer to stew perfection.

And that’s really the meat and potatoes of it. This recipe is truly uncomplicated!